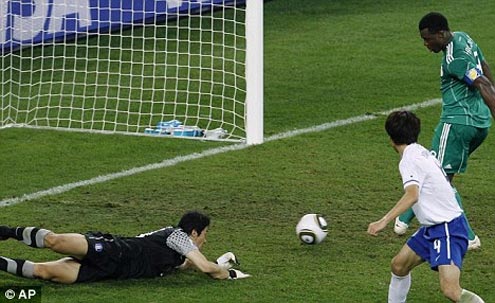 There is no doubt that Super Eagles of Nigeria striker and Everton of England star, Yakubu Aiyegbeni is guilty of one of the worst misses in World Cup history, when he failed to convert a vital goal that could have seen the country beat South Korea and pave way for the Eaglesâ€™ qualification to the Round of 16 of the ongoing 2010 FIFA World Cup.

His miss left South Korea goalkeeper Jung Sung-ryong a relieved man. Even the Technical Adviser of the Nigerian team, Lars Lagerback described Yakubuâ€™s miss the worst miss he has ever seen as a coach, saying it was a terrible miss, which Yakubu should have tapped into the empty net. He accused the striker of trying to place the ball, but it eventually went wide.

The former coach of Swedenâ€™s national football team said he and those on the reserve bench thought the ball was already in the net, as they were about to start celebrating only to discover that the ball was not in the net.

The soccer tactician, who was close to tears but gathered himself together, told PM Sports after the match that â€œI never knew Nigeria would be sent home this early, we were already thinking ahead of the next match because we were poised to do everything within our reach, but the miss by Yak was very bad. I donâ€™t know why he had to hit the ball the way he did because the ball was already in front of goal. The Korean goalkeeper was nowhere to be found. What I thought he would have done was to just put the ball in the empty net, but he messed up the chance. The miss was really a terrible one which I have never seen in my life.â€

Captain Nwankwo Kanu and other players took a swipe at the former Portsmouth of England forward, saying he was trying to score a spectacular goal and at the end of the day he found not only himself as a disgrace but the team as well.

Kanu said the entire team were mad at him because he wasted a begging chance, which ought to have been a goal, saying the Eagles must take full responsibility for the ouster and apologise to Nigerians for causing them pains during in the 2010 World Cup in South Africa.

According to Nwankwo, â€œAiyegbeniâ€™s miss was a big shock to me and other players, but we have to take responsibility for our ouster. Moreover it was not only Yakubu that missed a begging chance, Obafemi Martins also missed a chance when he had a one-one chance with the Korean goalkeeper, and remember that all Martins needed to do was to put the icing on the cake, but he failed and we are paying dearly for this now.â€

Meanwhile, coach of the Korean team, Huh Jung-moo was full of gratitude to Yakubu for giving his side the opportunity of moving on in the World Cup, saying that Yakubuâ€™s miss in yesterdayâ€™s match really helped his team to consolidate on the 2-2 draw till the end of the crucial encounter.

According to him, â€œDespite the fact that we were down by a lone goal, we kept attacking because we know that Vincent Enyeama is good on one-one. I told my players to be shooting from any opportunity they had. We also knew that Nigerian goalie is not good at set pieces and that was what we practiced in training. So when we scored the goals, I knew we were going to win.

â€œAs regards the miss by Yakubu, I want to say thank you! and thank you!! to the striker. It may be a tragedy to Nigerians, but to us it is a good thing and I would continue to remember Yakubu for this.â€