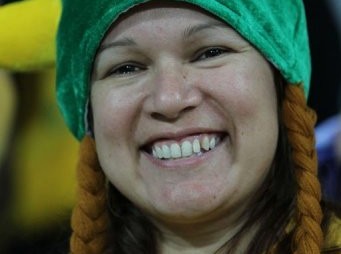 53 mins: Australia are carved apart by another slick passing move and Zigic shows a surprising level of skill as he controls a bouncing ball and hits a fierce shot that skims over the crossbar.

49 mins: YELLOW CARD! Excellent work down the left wing by Ninkovic who is unceremoniously scythed down by Wilkshire.

48 mins: YELLOW CARD! Beauchamp is booked for a late challenge on Ivanovic.

47 mins: The Socceroos have the first real chance of the match , and its from a set piece. Is anyone surprised? Bresciano whips in the ball into a crowd of players but Vidic whacks the ball into touch to avert the danger.

46 mins: Australia get the second half under way!

1920 GMT: The other match is still scoreless, so as it stands Serbia and Australia will be out of the tournament. Serbia have created plenty of gilt-edged chances but have yet to score which might prove costly

45 mins: There will be a minute of added time.

42 mins: Australia earn a freekick but danger is averted when Cahill and Kennedy collide into each other as they both stretch for a header.

40 mins: Serbia are the only side that have shown any real ambition and look a real goal threat in this match.

37 mins: Its goaless in the two Group D matches, so as it stands, Serbia and Australia will not progress to the next round

34 mins: Zigic wastes a glorious opportunity to break the deadlock when he fails to trouble Schwarzer with a header from the six-yard box. Are Serbia going to regret their profligacy in front of goal?

32 mins: Australia launch a rare foray into the Serbian half and Cahill runs onto a speculative cross but heads it wide.

28 mins: Inter Milan’s Stankovic lines up a long-range effort but it is easily dealt with by the Aussie keeper.

25 mins: Its party-time in Nelspruit as the locals start a giant conga in the stadium aisles.

23 mins: Superb save by Schwarzer who is forced to make a point-blank save from Kuzmanovic. Australia are living dangerously at the moment and they could already be down by a couple of goals if it wasn’t for the heroics of their keeper.

22 mins: Its been one-way traffic with Serbia dominating the Socceroos.

20 mins: Australia lack a real cutting edge and have so far failed to trouble the Serbian keeper.

18 mins: YELLOW CARD! Lukovic makes a clumsy challenge on Wilkshire and the referee struts across the pitch to brandish the game’s first booking.

16 mins: Serbia are really hurting Australia with long diagonal passes to the flanks. A slick passing move sees Kuzmanovic break free of the defence but he shoots wide from the edge of the penalty area.

12 mins: Terrible miss by Krasic! The CSKA Moscow winger breaks the offside trap and runs past Schwarzer butÂ  from a tight angle he misses an empty goal! Australia were let off the hook there!

10 mins: Serbia win a freekick and Zigic soars over Neill but cannot direct his header which doesn’t trouble Schwarzer.

9 mins: The Australian rearguard looks a little flat-footed but so far Serbia have failed to capitalise.

6 mins: Superb piece of skill by Krasic whose darting run takes him past Culina but his fierce goal-bound shot is palmed out for a corner by Schwarzer.

4 mins: Serbia have so far enjoyed the lion’s share of possession and Wiltshire shuts the door on a promising Serbian raid by heading the ball back to his keeper.

3 mins: Bright start by Australia, who are wearing their traditional gold shirts and green shorts.

1 min: Serbia, who are wearing red shirts and blue shorts, launch a quick attack but Neill snuffs out the threat.

1830 GMT: The referee blows his whistle and Serbia get us started!

1826 GMT: Huge roar from the crowd as the teams filter onto the pitch and the vuvuzelas fall silent for the national anthems. The Aussie players make a decent stab at their anthem followed by the Serbians.

1822 GMT: “Those who said the vuvuzelas will quieten down after South Africa’s elimination obviously are not at Nelspruit’s Mbombela Stadium,” says my AFP colleague Robert Smith.

“Aussie supporters in their gold shirts vastly outnumber the Serb fans approaching kick-off on a calm clear night on the gateway to the famed Kruger Safari Park,” he adds.

1822 GMT: “Those who said the vuvuzelas will quieten down after South Africa’s elimination obviously are not at Nelspruit’s Mbombela Stadium,” says my AFP colleague Robert Smith.

“Aussie supporters in their gold shirts vastly outnumber the Serb fans approaching kick-off on a calm clear night on the gateway to the famed Kruger Safari Park,” he adds.

1820 GMT: The Uruguayan referee could be very busy in this match as six players have been sent off in the last four World Cup matches involving Australia.

ELSPRUIT, South Africa (AFP) – 1820 GMT: The Uruguayan referee could be very busy in this match as six players have been sent off in the last four World Cup matches involving Australia.

Australia have called up Michael Beauchamp and Josh Kennedy as like-for-like replacements for the suspended Kewell and Moore.

1814 GMT: Australia face an uphill task to qualify for the next stage as they struggle to score goals. They must also deal with the aerial threat posed by Serbia’s beanpole striker Nikola Zigic.

1812 GMT: Australia will have to reshuffle their side as they will be without Galatasaray forward Harry Kewell and Kavala defender Craig Moore who are both suspended but coach Pim Verbeek can call upon Everton dynamo Tim Cahill who has served his one-match ban following his dismissal against Germany.

WELCOME TO THE MBOMBELA STADIUM in Nelspruit for our World Cup live commentary of Serbia’s Group D clash against Australia.

Serbia know a victory will allow them to reach the knock-out stages of the World Cup. The Balkan side can also progress with a draw as long as Ghana defeat Germany in the group’s other game.

Australia need to beat Serbia and then count on Ghana to beat Germany in Johannesburg. The Socceroos can also progress if they win and Germany thrashÂ  Ghana by four clear goals.

Kick-off is less than 30 minutes away at 1830 GMT so stay with us to find out if either of these two sides can reach the second round where they could face the USA or England.