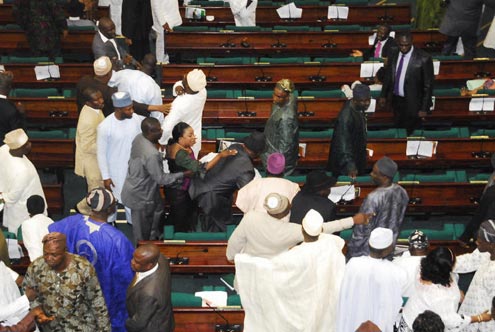 Hon Doris Uboh being dragged out from the Chamber on the order of Speaker Bankole.

Nigerians have condemed the show of shame at the House of Representatives yesterday where lawmakers shamelessly engaged one another in a free for all.

In his reaction, spokesman of the Save Nigeria Group, Mr. Yinka Odumakin, described the lawmakersâ€™ action as a show of shame, indicating that the House of Representatives was populated by thugs.

â€œWe have moved away from that kind of politics; Nigerians should know that they canâ€™t leave the scene for agberos.Â Â  They should come out and vote them out,â€ he stated.

Constitutional lawyer, Prof. Itse Sagay described the conduct of the lawmakers as unfortunate, saying that it was the beginning of the restoration process for the nationâ€™s democracy.

â€œIt has exposed how they have been looting us.Â Â  It is now time for the press and the civil society to take it from there so that we donâ€™t have thieves representing us,â€ he said.

According to Chris Akiri, Solicitor, Supreme Court, â€œit was really a show of shame and very unpalatable for both parties to have acted that way without a modicum of decorum.

Founder, Coalition Against Corrupt Leaders, CACOL, Comrade Debo Adeniran denounced the action of the lawmakers, saying that it was a way to tell Nigerians that they were representing themselves.

Lagos lawyer, Festus Keyamo condemned the show of shame, saying that he had been vindicated.

It was Keyamo who first blew the lid at a press conference in Lagos State, Nigeria over the purchase of cars by the House leadership for oversight functions of the various committees of the House.

In a press release immediately after the leadership of the House suspended 11 of its members for accusing it of corruption, the lawyer said the action of the Speaker, Dimeji Bankole, was the height of the misuse of power.

â€œThe resultant breakdown of law and order on the floor of the House leading to injuries, assault and damage to properties is a direct result of the loss of moral and political authority of the leadership of the House of Representatives.

â€œWhen I raised these allegations some time ago, they thought they could bury them. Now I have been vindicated,â€ he stated.

Keyamo also accused the government of lack of will to probe the allegations before now, describing the inaction as â€œa very sad commentary on the lack of preparedness of President Jonathan to fight corruption, no matter whose ox is gored.

â€œWhat is the fate of the anti-corruption war when whistleblowers are subjected to indignity and name-calling? I am sad, very sad indeed, that we have sunk to this low state of moral debauchery. The obvious silence of the Presidency over the earlier report of the 2.3billion naira car scam that was reportedly sent to it for consideration is what has led to this present display of crass arrogance and impudent show of power by the leadership of the House of Representatives in suspending and assaulting members who have raised their voices against corruption and corrupt practices,â€ he added.

Lawmakers exchanged blows in the Nigerian parliament on Tuesday over an attempt to discuss graft allegations against the speaker of parliament, Dimeji Bankole.

Local television footage showed rival lawmakers at each othersâ€™ throats during the brawl in the 360-strong parliament.

One was left stripped of his clothes in the chaos after he refused to vacate the chambers following his suspension from the parliament by a resolution of the house, a local parliamentary reporter said.

He was allegedly found in possession of a teargas cannister.

Another had his hand twisted and dislocated after he tried to use pepper spray on a fellow deputy, a local journalist said.

The fracas was triggered by a resolution to suspend 11 lawmakers for allegedly breaching house rules in their attempts to have the speaker probed for suspected corruption charges.

Lawmaker Farouk Lawan said it was â€œa very bad day for members of the houseâ€.

A group of parliamentarians have accused the speaker of misappropriating 60 millon dollars of public funds between 2008 and 2009.

The countryâ€™s anti-graft police has said it will investigate the allegations. In 2007, the lawmakers also fought as the then assembly speaker Patricia Etteh was about to give evidence on millions of dollars (euros) used to renovate her official home.

Etteh subsequently resigned and was replaced by Bankole.