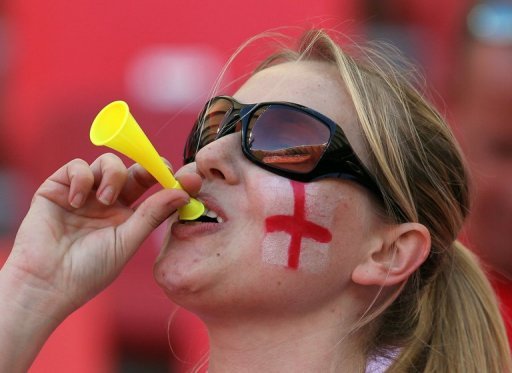 -25 mins: England nearly two up. Another fantastic Milner cross is palmed out to Lampard but his left foot shot is over. England looking much more like themselves.

Jermain Defoe scores to calm England nerves. I was about to say Milner was struggling but then he put in a stunning cross from the right wing which Defoe attacked and shinned into the roof of the net., although Handanovic got both hands to the ball.

-20 mins: Johnson hits a left-footer from range but the keeper collects. At the other end Terry throws himself to block Zlatan Ljubijankic’s shot when real danger threatened. James does very well to save from the resulting corner.

-18 mins: Rooney gets some space on the edge of the area and shoots but it is deflected wide for a corner. Terry just gets to it, but it brushes off his head and out of play. Another corner given, for some reason.

17 mins: The pitch is already cutting up, as feared. You hope that this won’t lead to a costly error for either team.

15 mins: Rooney tries to put Lampard but it is just too hard. England looking much better though.

14 mins: England get a free-kick 40 yards from goal. Frank Lampard sets up to shoot…..Handanovic gets down and holds on well.

13 mins: Jermain Defoe is struggling to get in the game, chasing after Terry’s long ball but Samir Handanovic collects with time to spare.

10 mins: Rooney does well on the wing and whips in a cross which is put out for a corner with Gerrard lurking.

9 mins: Gareth Barry gets away with a solid foul in the centre spot. At least England are showing some willingness to fight.

6 mins: England looking to a more patient approach, but still look nervous when they get near the penalty area. John Terry gets away with a sloppy pass and then David James does well to collect Valter Birsa’s long-range shot without spilling.

-5 mins: YELLOW CARD! Glen Johnson is booked for an unneccessary tackle on the right wing. It was his second in as many minutes.

3 mins: England’s first attack as Jermain Defoe wins the ball high up the pitch. James Milner puts a poor ball into the box though.

2 mins: Gerrard looks to be out on the left. Engalnd fans collectively pull their hair out. Nervy start from England with Glen Johnson and Matthew Upson dithering in defence.

1 min: Slovenia get us underway with England fans singing “England ’til I die.” We’ll see if that holds true at the final whistle.

1352 GMT: The players come out fo the tunnel, England in their change strip of all red and Slovenia in their white tracksuits.

According to my colleague Nick Reeves, “shouts of ‘Engerland Engerland’ momentarily silence the drone of the vuvuzelas as the teams come out onto the pitch.”

The Slovenians sing heartily but tunelessly. The England players really belt out “God Save the Queen,” apart from Rooney. There was some feeling in that, but will it translate onto the pitch.

1346 GMT: The BBC panel are imploring that Steven Gerrard is freed from his left wing position and is given a role just behind Wayne Rooney. We’ll see!

1343 GMT: AFP man in the ground Nick Reeves tells us that the England fans are doing their bit to help the local economy.

“One England fan, Jim, a primary school teacher from Leeds, was eating a curry outside the stadium before kick off, ‘to soak up all the beer.’ 25,000 England fans expected, could be on for our first full house after five matches at the Nelson Mandela Bay stadium,” he says.

1340 GMT: BBC pundit Alan Shearer backs former captain John Terry over his outspoken press conference in the aftermath of the Algeria game, in which he promised to air his grievances during a team meeting..

“I think he had the right intentions,” he says. “I was really surprised that he (Capello) came out and said no meeting took place.”

1334 GMT: Slovenia line up as expected with no changes form their 2-2 draw with USA.

England do make changes. Manager Fabio Capello has resisted player pressure to pick Joe Cole, and instead brings in James Milner and Jermain Defoe for Aaron Lennon and Emile Heskey.Â  Matthew Upson replaces Jamie Carragher who picked up his second yellow card in the 0-0 draw with Algeria.

Here are the teams:

WELCOME TO NELSON MANDELA STADIUM in Port Elizabeth for our World Cup live text commentary of the do-or-die Group C match between Slovenia and England.

Calculators and defibrillators are at the ready as all four teams are still in with a chance of qualification to the next round.

I’ll try and make this is as brief as possible: If Slovenia win or draw, they are through. If they lose they can still qualify depending on the result of the USA v. Algeria game which is taking place at the same time.

If England win they are through, lose they are out. If they draw they are out unless the US also draw and England score three more goals than the Americans in doing so. If they score two more and they both draw then lots will be drawn.

Slovenia will top the group if they win and it will come down to goal difference between them and the US if they draw and the Americans win.

England will finish as group winners if they win by a greater margin than the US.

It promises to be quite an afternoon in the sleepy coastal resort.

To see if England’s World Cup dreams sink on the Indian Ocean, or whether Fabio Capello’s team sail into the last 16 then join us for kick-off at 1400 GMT.