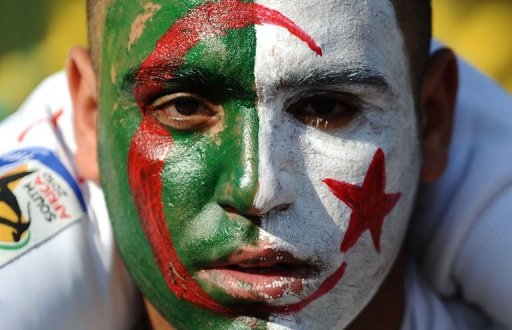 PRETORIA, South Africa (AFP)Â PRETORIA, South Africa (AFP) – 90+4 mins: FULL TIME! USA 1 Algeria 0
90+3 mins: RED CARD! Yahia is dismissed for a second bookable offence.
90+1 mins:
90+1 mins: GOAL! USA 1 Algeria 0
Nice work by Donovan and Altidore as they launch a quick counter-attack..the keeper stops a shot by Dempsey but Donovan sweeps home the rebound to give them a well-deserved lead.
90+1 min:
90 mins: There will be four minutes of stoppage time.
88 mins: USA go route one and it nearly pays off! Altidore gives chase to a long punt from Howard..but after outracing the defence he fluffs his pass Â s punts the ball forwas
86 mins: The USA are starting to leave gaps at the back as they send more players into attack, but Algeria are not able to capitalise.
85 mins: Algeria make another change and Matmour is replaced by Istres’ frontman Rafik Saifi
82 mins:YELLOW CARD! Algeria’s Lacen is booked for tripping up Altidore who was in full flight and charging towards goal.
80 mins: Final roll of the dice by Bradley as he throws on Rangers winger Marcus Beasley for defender Bornstein.
79 mins: USA win a free-kick on the edge of the area and Bradley fires a fierce shot but the keeper parries it out for a corner. That was a superb shot by the Borussia M’gladbach midfielder!
74 mins: Buddle has his first chance of the match but cannot direct his header downwards.
72 mins: Its desperate times for the USA as they know they need to score to salvage their World Cup dream.
70 mins: That was close! USA nearly take the lead after a messy goalmouth scramble but Algerian keeper remains firm.Â – 60 mins: Staunch defending by Bocanegra who shuts the door on a dangerous Algerian counter-attack! The Algerian forward was ready to pounce if the Rennes defender hadn’t made that last-ditch tackle.
– 57 mins: Superb play from Bradley! The US midfielder dispossesses Ziani before freeing Altidore down the left wing. The Hull striker crosses for Dempsey who sees his shot hit the post and then scuff the rebound wide when he had an open goal. How did he not score?
– 53 mins: The tigerish Bradley is at the heart of every US attack and if the ‘Stars and Stripes’ do take the lead then I wouldn’t be surprised if he was involved in the build up.
– 50 mins: Nice period of possession by Algeria as they force three corners in the space of a few minutes, but the threat is comfortably dealt with by the USA.
– 47 mins: Algeria are really fired up for this and Djebbour just fails to reach a cross by Yebda.
47 mins: US football fans are still smarting about the disallowed goal.
“Roars of outrage erupted among American fans packed into the Lucky Bar in Washington DC’s Dupont Circle when the goal was called offside,” says my AFP colleague James Mannion.
Caleb Shoenhard, 26, nursing an early morning beer, recalled American reaction to the bad referree call in its match against Slovenia, saying it could easily sour Americans on a sport they have taken only a tepid interest in.
“But because there is still hope for the US to go through there is still the Cinderella possibility. It didn’t kill interest. It could have boosted it,” he says.
“There is enough interest that fans packed the bar, skipping work or taking the day off to watch.
A magazine staffer called in sick.
“Then on my way here I crossed the street in front of a black BMW and sitting at the steering wheel was my boss,” she said.
– 46 mins: The USA — who have made one change with Benny Feilhaber replacing Gomez — get the second half under way.
– 1457 GMT: One scenario I haven’t mentioned is that if this match ends scoreless and the other match between England and Slovenia ends 2-2, then Slovenia will qualify top of Group C and FIFA will draw lots to see who finishes second between the USA and England.
1456 GMT: In Algeries the streets are deserted and shops are shut with football fans sitting in front of their TV screens,” says my colleague Pierre-Yves Julien.
In an attempt to improve relations between the two countries, the US ambassador to Algeria, David Pierce, has invited a number of Algerian journalists to watch the match on a giant screen. Let’s hope events on the pitch don’t cause any problems between them.
– 45+1 mins: The referee blows his whistle and the players trudge off the pitch.
45 mins: The fourth official indicates there will be a minute of added time.
42 mins: Algeria are starting to claw their way back into this match and Howard breathes a sigh of relief as he sees Ziani’s shot go wide.
40 mins: Its been one-way traffic for the past 10 minutes but Algeria launch a quick attack and Matmour goes close from 30 yards.
37 mins: What a chance for Altidore…he must score! Oh dear, the Hull striker needed to show a bit more composure as he fluffs a great chance. The ball falls to the burly striker on the six-yard box but instead of tapping it in he tries to smack the leather off the Jabulani and sends it over the bar. Algeria have been let off the hook!

– 45+1 mins: The referee blows his whistle and the players trudge off the pitch.
45 mins: The fourth official indicates there will be a minute of added time.
42 mins: Algeria are starting to claw their way back into this match and Howard breathes a sigh of relief as he sees Ziani’s shot go wide.
40 mins: Its been one-way traffic for the past 10 minutes but Algeria launch a quick attack and Matmour goes close from 30 yards.
37 mins: What a chance for Altidore…he must score! Oh dear, the Hull striker needed to show a bit more composure as he fluffs a great chance. The ball falls to the burly striker on the six-yard box but instead of tapping it in he tries to smack the leather off the Jabulani and sends it over the bar. Algeria have been let off the hook!

33 mins: USA nearly take the lead as Cherundolo whips in an inviting cross but Gomez and Dempsey get in each other’s way and Algeria clear the danger.

30 mins: The US keeper looks like he is waving at the stars as he flaps at a corner. That could have been dangerous!

28 mins: The England goal has really unsettled these two teams who are struggling to retain possession.

25 mins: “One man in a USA delegation jacket was so upset on seeing the replay of the offside-negated us goal that he slammed a table hard enough to knock two power plugs out of their sockets,” says AFP’s Jim Slater.

22 mins: England have taken the lead against Slovenia, so both sides know they are going home if they can only manage a draw.

21 mins: TV footage of FIFA chief Sepp Blatter trying to explain the offside rule to the former US president, who still looks bemused!

20 mins: Angry scenes in the USA dugout as the linesman disallows what looked like a legitimate goal!

Altidore breaks down the right before feeding the ball to Bradley on the edge of the penalty area. The US midfielder is tackled but the ball falls to Gomez whose shot is saved by the keeper…the ball ricochets to Dempsey who knocks it in from three yards.

The linesman dashes the US celebrations by claiming the Fulham midfielder was offside.

18 mins: Nive period of possession by the USA who have really started to impose themselves on the Desert Foxes.

17 mins: Lots of ooohs from the USA fans as Donovan takes aim from 30 yards but the ball sails high over the crossbar. ThatÂ  was never going to trouble the Algerian keeper.

13 mins: Gomez has looked very lively and goes close with an overhead kick.

8 mins: Our reporter tells me there are a hefty number of empty seats in the stadium.

“The ends are half full but notable stretches of empty seats in the upper and lower stands, a first here after having Ghana, Cameroon and South Africa in prior matches. Come on down!” he says.

7 mins: “Whistles from Algeria fans whenever the USA gain possession drown out the vuvuzelas, a first at this World Cup,” says AFP’s Jim Slater.

5 mins: Its end to end stuff as the US defence fails to clear a long ball and Algeria’s Djebbour rattles the crossbar with a fierce shot. The US then launch a quick counter-attack and Gomez hits a fizzing shot which is a whisker wide of the post.Â  Its been a frantic first few minutes with both sides shhoting on sight.

3 mins: Algeria are clearly motivated and have made a promising start to the match.

1 min: Algeria’s Matmour has the first shot of the match but the US keeper watches the long-range shot from the Borussia M’ggladback forward go well wide.

1400 GMT: AND WE’RE OFF! Algeria wearing an all green strip get us under way, against the USA side who are all in white.

1358 GMT: There is a lot of activity in the run-up to the match, says our reporter who is at pitchside.

“A FIFA official is continuously banging one of those clapper boards used to designate film and TV show scenes to directors and cameramen,” says our man in Pretoria.

1356 GMT: The US players give a lung-bursting rendition of the ‘Star Spangled Banner’ while the