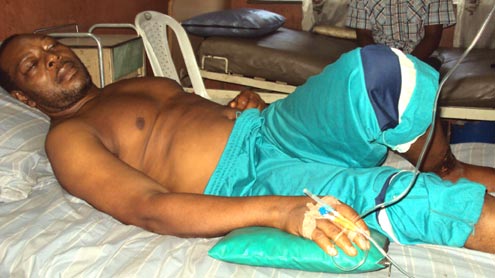 Veteran actor Prince James Uche is currently in a critical condition and needs prayers and support from kind-hearted Nigerians to survive a strange ailment that has kept him bedridden for the past eight months.

The ailing Nollywood actor, who regained consciousness on Friday afternoon after about two days in coma, has called on well-meaning Nigerians to come to his aid, saying he has spent everything he had worked for battling the strange ailment.

When NollywoodReel visited him at PAX Medical Clinic located at 2 Adedoyin Street, Aguda, Surulere, recently, he could hardly recognise people or remember anything.

After much effort, he managed to explain that the strange ailment started in November last year when he collided with the chain of a BRT bus median in Anthony Village area of Lagos.

The actor, who looks very frail on his hospital bed, said: â€œI collided with a BRT chainâ€¦ that is all I can say. The next thing I saw was that my leg started swelling. I have been to churches and several hospitalsâ€¦ this pain is too much for me.â€

NollywoodReel gathered that when Prince Uche sustained the injury on his left leg, he thought it was a minor bruise until the condition deteriorated. And ever since, doctors have been battling to heal him. He had also visited spiritual healers, all to no avail. A good friend of actor Pete Edochie, Prince Uche has featured in movies like Fair Game, Stubborn Billionaires, Big Boys Club,Â  Dangerous Mind,Â  Dons In Abuja, Town In Danger and Rituals to mention a few.

National President of the Actorsâ€™ Guild of Nigeria, AGN, Segun Arinze, said the guild has been trying its best to assist the ailing actor financially, â€œbut we definitely need the assistance of well-meaning Nigerians because his health condition is very critical.â€