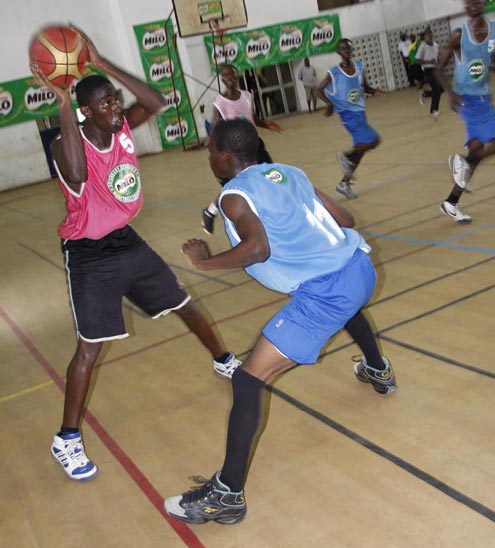 Head coach of International School (ISL), University of Lagos, Ernest Ijeomah has expressed the desire of his team to go all the way this year in the Nestle Milo Secondary School Basketball Championship .

Speaking with P.M.Sports after his school picked the ticket to represent Western Conference at the national finals of the championship coming up in Lagos later in the year, Ijeomah stated that they want to win the championship this year having come very close two years ago.

He said the team are ready to work extra hard to achieve the feat which he believes they are capable of doing. Ijeomah who has produced many young talented athletes, not only for the state but for the country, disclosed that they have the talents that can bring back the trophy that has eluded the state for some time now.

To emerge champions at Liberty Stadium, Ibadan, Oyo State venue of the Western conference finals, ISL defeated their counterparts from Ogun State, Excel College in the boys final, while Delta State picked the ticket in the girls category through Asaba Girls Grammar School who outclassed former champion, Oyo Stateâ€™s Yejide Girls Grammar School, to berth in the final scheduled for Lagos in October.

The ISL team, coached by Ernest Ijeomah, triumphed over the Peter Akindele-tutored side in the last quarter to win the match at 34-26 points, while the encounter between Delta and Oyo in the girlsâ€™ event was one-sided with the Delta State team winning the match at 34-9.

Meanwhile, Kehinde Adeoye of ISL was voted the Most Valuable Player (MVP) in the Western conference after his performance and output ensured his team, ISL overcome the rampaging Ogun State team.

The Western Conference has teams from Edo, Delta, Lagos, Ogun, Ondo, Osun, Ekiti, Kogi and hosts, Oyo State taking part in the finals, while at the Ilorin Township Stadium which hosted the Central Conference, teams from Bauchi, Nasarawa, Kaduna, Abuja, Niger, Plateau, Benue, Gombe participated in the championship. The winners from each conference were given N35,000, second place teamÂ  got N25,000, while the third place teams got N15,000.