Ghana moves to the next round! 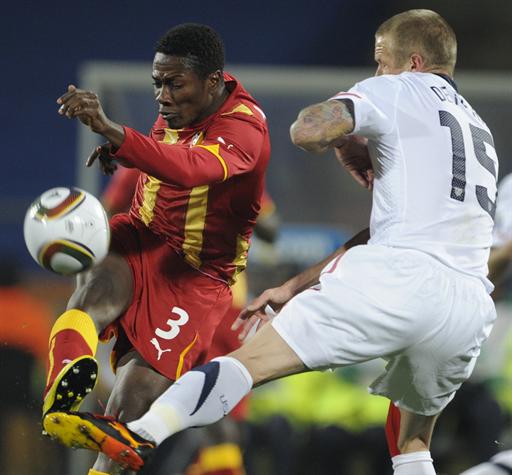 Ghana's striker Asamoah Gyan (L) fights for the ball with US defender Jay DeMerit during the 2010 World Cup round of 16 football match USA vs. Ghana on June 26, 2010 at Royal Bafokeng stadium in Rustenburg. AFP PHOTO / JAVIER SORIANO

Africa and South America won the clash of the continents against North America and Asia respectively on Saturday as Ghana knocked out the USA 2-1 after extra-time and Uruguay defeated South Korea also by the scoreline of 2-1 on a day when the World Cup really came to life with two dramatic matches.

Ghana reached the World Cup quarter-finals for the first time by beating the United States 2-1 after extra time at the Royal Bafokeng Stadium at Rustenburg on Saturday.

Striker Asamoah Gyan scored the winning goal, his third of the tournament, in the third minute of extra time after shrugging off Carlos Bocanegra and lashing a half-volley over Tim Howard in the American goal.

Attacking midfielder Kevin-Prince Boateng gave Ghana the lead after racing away from the US defence in the fifth minute before Landon Donovan drew the US level from the penalty spot in the 62nd minute.

“I am the happiest man in the world,” said Gyan.

“In 2006 we made the second round, now we have gone a step further. We have made Ghana proud and the whole of Africa proud.”

Ghana are the last African side in the competition and will seek to become the first team from the continent to reach the World Cup semi-finals when they tackle Uruguay in the last eight at Soccer City in Johannesburg on July 2.

South Korea v Uruguay: Suarez sends Uruguay into last-eight with brilliant strike to sink S. Korea
Uruguay ended their 40-year wait to reach the quarter-final stage as they defeated South Korea 2-1 in a thrilling second round match under pouring rain at Port Elizabeth. Luis Suarez sent Uruguay into the last-eight for the first time since 1970 when he curled home his second goal of the match on 80 minutes to send the South American’s into wild scenes of celebration.

It was slightly harsh on the Asian side who came back from an early Suarez strike to level the match on 68 minutes when Lee Chung-yong headed home and it appeared they had the ascendancy. But Suarez had other ideas as his amazing season of goals continued and this one was one to remember as he curled the ball off the post with a delightful piece of finishing.

Uruguay will play Ghana for a semi-final spot.