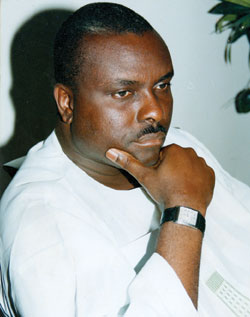 A Federal High Court sitting in Asaba has rejected an application filed by James Ibori, the embattled former governor of Delta State, South-South Nigeria, in which he asked the court to stop the Economic and Financial Crimes Commission, EFCC, from inviting him for questioning or arresting him.

Ibori had filed the application following attempts by the anti-graft agency to question him on charges that he used the state’s shares in Oceanic Bank as a collateral for a loan granted a private company, Ascot Nigeria Limited by Intercontinental Bank when he was governor.

Ibori and his associates are alleged to be owners of the oil services company.

The EFCC had declared Ibori wanted after he failed to respond to invitations to appear before it to give further clarifications on the issue.

But ruling on Iboriâ€™s application this morning, Justice Ibrahim Buba declared that the court lacked jurisdiction to stop a statutory body from arresting anybody in connection with a criminal act.

Buba also agreed that the EFCC has not violated any law by asking Ibori to appear before it.

The former governor is currently being detained in Dubai, United Arab Emirates, UAE, on the instruction of London Metropolitan Police in connection with alleged money laundering charges.

Two of his associates were recently jailed in the United Kingdom for laundering seventy million pounds and stashing the stolen funds in London banks.