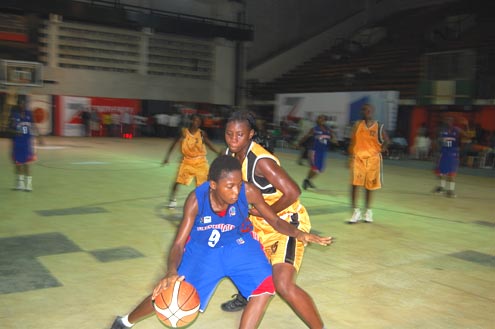 On Saturday at the National Stadium, Lagos, Indoor Sports Hall, First Deepwater Basketball Club of Lagos emerged the new champion of the Nigeria domestic women league as they rose to the occasion by ending the dominance of First Bank Basketball Club in the grand finale of the 6th edition of the NBBF/Zenith Bank Women Premier League.

The oil and gas ladies dominated the game from the first quarter resulting in a 24-09 points win for the Coach Lateef Erinfolami side, who showed great determination to carry the day as they continued the onslaught in the second quarter, though they dropped the quarter to the former champion by 20-14 points. But they held on to the lead with a 38-29 points advantage going into the break.

The Babatunde Babalola-owned club further widened the margin between them and the reigning African champion when they took the third quarter with the duo of Nkechi Akashili and Ijeoma Uchendu marshalling the First Deepwater offence and defence by 12-09 points and returned to win the fourth quarter by 16-11 points to end First Bankâ€™s dominance of the Nigeria women league, for close to ten years with a 66-49 points victory.

Uchendu, who was later adjudge the league best rebounder, led the floor with a double double figure of 22 points, 12 rebounds, 9 assists and 2 steals while Akashili emerged the leagueâ€™s Most Valuable Player (MVP) displacing First Bank captain and guard, Funmilayo Ojelabi, She also had a double double of 20 points, 10 rebounds and 3 assists with forward Kelechi Obasi contributing 13 points and 7 rebounds.

First Deepwater led the Coach, Adewunmi â€œOwoloâ€ Aderemi tutored First Bank in all departments of the game watched by a capacity crowd as the Babalola ladies grabbed a total of 47 rebounds (offence and defence) to First Bankâ€™s 39. First Deepwater players gave a total of 18 assists as against First Bankâ€™s 10, while they turned the ball over fifteen times against First Bankâ€™s 20 turn-over. Speaking with Basketball Timeout after their hard earned victory, Nkechi Akashili the Most Valuable Player of the 2009/2010 season dedicated the victory and her award to the memory of her sister, Tina Akashili, who died last month.

She also thanked God for the victory, while praising their opponents, First Bank for fighting to the last. Also speaking, Coach Erinfolami attributed his sideâ€™s victory to dedication and total commitment on the part of the players and management of the modest side who stormed the Nigerian scene in December 2008.

Erinfolami, who is winning a major title in the local scene for the first time since turning coach after a fruitful playing career, stated that itâ€™s their turn to dictate the pace in the Nigeria women basketball league and make appreciable impact in Africa and world club championships.

â€œWe are not going to let our winning the league title become a stumbling block to us. Rather, we shall continue to build on this great achievement, I am dedicating this victory to the players for their dedication and commitment and the club management for always giving us words of encouragement even in the face of financial hardship, which our sponsoring company experienced recently, but we thank God for making it possible by crowning our efforts with this resounding success,â€ Erinfolami noted.