PDP, An Embarrassment To Nigeria â€”AC 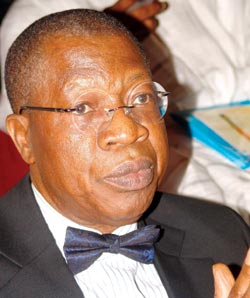 The Action Congress (AC) has described the ruling Peoples Democratic Party (PDP) as a perpetual source of embarrassment to Nigeria and called on voters to send the party packing next year.

In a statement issued in Lagos on Sunday by its National Publicity Secretary, Alhaji Lai Mohammed, the party said while ruling parties in other climes are the bastion of ideas that help to move their nations forward, the PDP has been busy embarrassing the nation over mundane issues.

It said within the past week alone, the party has confirmed that it is indeed an assemblage of strange bed fellows, an instrument for the plunder of the nation’s riches and a source of deep embarrassment to Nigerians.

“As if the resort to fisticuffs in the hallowed chambers of the National Assembly by supposedly honourable members were not enough, the leaders of the two chambers took over by dancing naked in the public square, as they traded accusations over who sent a doctored version of the Constitutional Reform Bill to the state Houses of Assembly. Anyway, we are not surprised. The PDP has a history of doctored bills, dating back to the inglorious Obasanjo era.

“To cap a string of shameful shows, the PDP has now turned against its own leader, President Goodluck Jonathan, calling him a liar for daring to say the party, which by the way is a rigging machine, was afraid of the new boss of the Independent National Electoral Commission (INEC), Prof. Attahiru Jega.

“If anyone was in doubt that things have indeed fallen apart under the tattered PDP umbrella, such people should by now have shaken off such doubt,” AC said.

The party warned, however, that the show of shame exhibited at the ‘House of Representatives-turned-House of Horror’ should not prevent the anti-graft agencies from getting to the root of the crisis in the House and unravelling what happened to the N9 billion capital vote.

“The free-for-all by the lawmakers in the House, constituted 80 percent by the PDP, is not about bringing food to the table for hungry Nigerians or quenching their thirst through the provision of potable water, it is about those among them who have front seats on the gravy train,” it said, adding: ”This is why the anti-corruption agencies must get to the root of the allegations over the Capital vote.”

On the Constitutional Reform Bill, the party hailed the Lagos State House of Assembly for alerting Nigerians to the fact that the wrong bill was sent to the Houses of Assembly.

“We commend these true representatives of the people in the Lagos House of Assembly, and we urge all Nigerians to be vigilant in the days ahead, as the nation moves closer to next year’s general elections,” AC said.