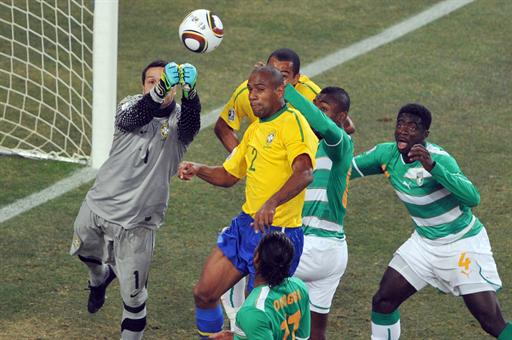 Two of the great entertainers are on show today as five time world champions and inventors of what some call the beautiful game Brazil take on Chile, while total football inventors Holland also drew continental rivals in Slovakia.

Netherlands v Slovakia: Robben out to slay Slovaks
Slovakia hopes to produce a repeat performance of their shock group victory over Italy when they clash with the Netherlands in Durban this afternoon. They will look toward their striker Robert Vittek, scorer of three goals so far.

The unfancied Slovaks stunned the defending champions 3-2 to finish as group runners-up and secure a second-round showdown with the Dutch, finalists in 1974 and 1978. Slovak coach Vladimir Weiss said the match against the Dutch was a “career-topping game for both me as coach and all the players”. Weiss is set to recall is whiz kid son Vladimir jr to the starting line up. Slovakia are capable of the best and the worst, they drew their opener 1-1 with New Zealand and lost to Paraguay 2-0.

The Netherlands have been boosted by the return against Cameroon of star winger Arjen Robben from a hamstring injury. Robben erased any lingering doubts in emphatic style with a trademark contribution to the Netherlands’ winning goal, slamming a shot against the post with Klaas-Jan Huntelaar burying the rebound. The Bayern Munich player will likely come off the bench for a half.

The winner of this match at the Moses Mabhida Stadium faces a tough quarter-final against the winner of the Brazil v Chile play-off.

Brazil v Chile: Robinho fired up for favourite rivals
If Robinho could have picked a team for Brazil to meet in the round of last 16 at the World Cup it would surely have been Chile.

The man who was one of his country’s top performers in their opening two group games before being rested for the draw with Portugal is aware that the five-times champions have won their last five meetings with La Roja and he himself has scored no less than six goals against them.

What is even more worrying for Chile is the fact that central defenders Gary Medel and Waldo Ponce are both out through suspension.

But Chile pushed Brazil all the way in the 18-match regional qualifying programme to reach their first finals since 1998, and are determined to pull off a shock and reach the last eight.

Chile will now be able to unleash Humberto Suazo, who impressed in the qualifiers with continental best ten goals, but who only managed to play 45 minutes in the group phase owing to injury.

There is pressure on Brazil to put in a performance after thir dull 0-0 clash with Portugal and a narrow win over North Korea. Some would also point to the hand ball that helped see off Ivory Coast. So the return of Kaka from suspension is a welcome boon for Dunga, whose side have shown strength and resilience as well as the occasional burst of flair.