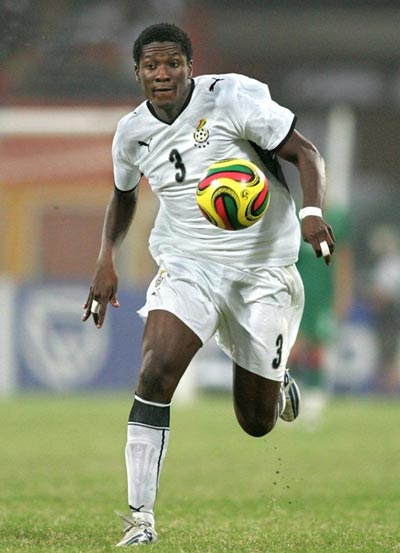 The Rennes of France star sat out most of a rigorous two-hour session as Africaâ€™s last hopes prepared for Fridayâ€™s World Cup quarter-final cracker.

Though Gyan himself has played down the pains and the extent of the injury, saying he would be ready for the all-important match, indications are that the injury, may have an adverse effect on his performance in the crucial clash

â€œI felt a knock and itâ€™s a bit swollen, but I donâ€™t think itâ€™s too serious. By Friday Iâ€™ll be ready,â€ he told reporters after a lengthy training session at Mogwase, near the teamâ€™s Sun City base.

Missing from the session were captain John Mensah, midfielder Kevin-Prince Boateng and winger Dede Ayew, who all picked up knocks in the weekendâ€™s second round win over the United States.

Boateng has a hamstring injury, and is doubtful for Friday, and Mensah suffers from persistent back problems. Ayew is resting an ankle knock plus is suspended for the upcoming clash.

But central defender Isaac Vorsah, who has missed the last two matches for the Black Stars at the tournament in South Africa, participated throughout the training. Gyan, who has scored three of Ghanaâ€™s four goals at the finals, said reaching the last eight was a massive achievement for the Black Stars.