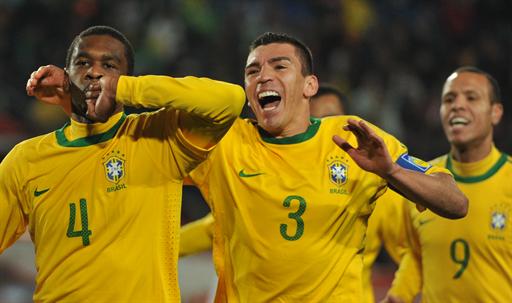 The Netherlands charge through to the quarter finals, eliminating Slovakia in Durban. The Dutch now face five-times world champions Brazil who dismissed Chile in the other second-round tie on Monday.

Netherlands v Slovakia: Robben, Sneijder see off Slovaks
Arjen Robben and Wesley Sneijder scored in either half on Monday to send Holland through to the World Cup quarter-finals after beating Slovakia 2-1, surviving Robert Vittek’s late spotkick.

The Dutch now face Brazil for a place in the semis.

But coach Bert van Marwijk started him against Slovakia and he scored a textbook goal in the 18th minute, taking a pass from Sneijder before drilling home a left-footed shot in at the near post past the despairing dive of Jan Mucha.

Dirk Kuyt then fed Sneijder for the clincher on 80 minutes before Vittek converted a penalty with the last kick of the match.

Brazil defeat Chile 3-0, face Dutch in last eight
Brazil set up a mouth-watering World Cup quarter-final clash against the Netherlands with a convincing 3-0 win over Chile on Monday at Ellis Park.

First-half goals by centre-back Juan and striker Luis Fabiano gave Dunga-coached Brazil a 2-0 lead before Robinho made sure of their quarter-final berth with the third goal after an hour. Brazil will face the Netherlands, who earlier saw off Slovakia 2-1, in Port Elizabeth on Friday.

Brazil took the lead on 34 minutes when Maicon swung in a corner and Roma defender Juan rose the highest to head past Bravo. Luis Fabiano made it 2-0 four minutes later after Kaka took a pass from Robinho on the left wing and slid the ball through for the Sevilla star to draw Bravo and slot home.

Brazil then grabbed their third goal after Benfica’s Ramires ran from the halfway line to the edge of the penalty area where he laid the ball off for Robinho to fire home on 59 minutes.

Chile refused to give up and substitute Jorge Valdivia fired over the crossbar on 67 minutes.

Ramires will miss the quarter-final with the Dutch after earning his second yellow card of the tournament for a foul on Alexis Sanchez on 71 minutes.

Suazo forced Brazilian goalkeeper Julio Cesar into a rare save on 75 minutes, just before Robinho had a second goal ruled out for offside.