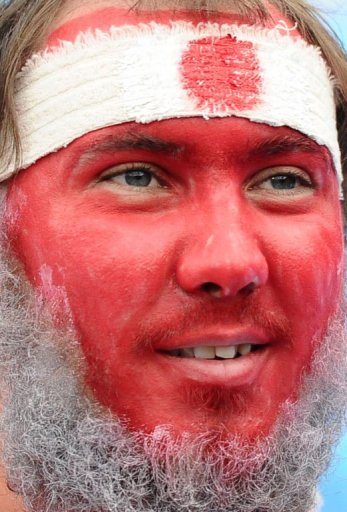 1739: Hasebe levels it for Japan with another coolly taken spot kick.

1736:Â – 1752 GMT: Â – PARAGUAY BEAT JAPAN 5-3 ON PENALTIES to reach the World Cup quarter-finals for the first time in their history. They will play Spain or Portugal.

1756 GMT: A quick quote from Oscar Cardozo, the decisive penalty scorer. “Everyone’s very happy, me in particular. I thank God and I dedicate this victory to our fans who always support us and to my family.”

Join us later for the Spain v Portugal game. The bets are on that that match will not end goallless at the end of regular time. To find out how the Paraguay v Japan match unfolded, read below.

1750 GMT: So Paraguay will face the winners of tonight’s game between Spain and Portugal. Their coach Gerardo Martino burst into tears and has told his country’s TV station his team have “suffered a lot”.

1745 GMT: Once Komano missed his penalty, Japan were up against it. And the South Americans scored five in a row.

1744 GMT: Paraguay reach the last eight for the first time in their history thanks to cool and calm spot kicks, but Japanese fans are distraught.

1733 GMT: It is the first penalty shootout of this World Cup. Cardozo hugs Paraguay ‘keeper Villa for luck. There are smiles despite the tension.

1731 GMT: We are heading for penalties! The game was just too tense, but now it will be decided in the tensest way of all.

25 mins: Okazaki fails to find Nakamura, who would have had an open goal. A huge chance for Japan goes begging.

17 mins: Let’s remind ourselves that either team will make history by going into the quarter-finals. Neither has done it before.

16 mins: Here we go then. Either Japan or Paraguay score in the next Â 15 minutes, or we are heading for a penalty shootout.

15 mins: END OF FIRST HALF OF EXTRA-TIME! Paraguay 0 Japan 0

8 mins: Honda’s free-kick seems to be going wide but Villar pushes it away anyway.

6 mins: Valdez squeezes through two defenders but his close -range shot is smothered by Kawashima. A great chance which Valdez made himself.

– 5 mins: The towering Cardozo scored 38 goals for Benfica last season. He is good in the air too…

1 min: Extra-time kicks off. Almost as soon as it starts, Santa Cruz is taken off to make way for Oscar Cardozo.

90+3: Honda is shown the yellow card for hand ball.

90+1: Endo’s free-kick is whipped in, Nakazawa heads it across goal, but Tulio can’t reach the ball.

90 mins: Three minutes are added on. not impossible.

– 86 mins: There is a second ball on the pitch. Maybe that will help break the deadlock!

84 mins: This game will almost certainly break the pattern of the last 16 so far. Every one of the six games has seen at least three goals.

– 82 mins: Nagatomo’s cross is punched away by Villar who is clattered by Yoshito Okubo. But he dusts himself off and gets on with the match.

80 mins: Kengo Nakamura comes in for Yuki Abe. Can he make the difference?

– 66 mins: Tulio is flattened by his own goalkeeper and seems to have hurt his left arm. That must hurt.

62 mins: Tulio fights off his marker but his header from a corner does not threaten the Paraguay goal. The tempo has lifted again.

61 mins: Matsui has been booked for hand ball.

60 mins: Sorry, that should be Valdez. On he comes in place of Edgar Benitez.

55 mins: Suddenly Paraguay look the most dangerous. Borussia Dortmund striker Nelson Valdes is about to come to give them a new attacking dimension.

51 mins: Nestor Ortigoza dribbles into the Japanese penalty area but fails to get a shot and Tulio Tanaka makes a key tackle.

49 mins: So much is at stake for both sides and it shows.

46 mins: Paraguay get the second half under way. Let’s hope it’s more exciting than the first.

1557 GMT: One female fan in the crowd is offering fans kisses and logging them on a placard. And it looks as though Japan is ahead…

1455 GMT: Just two scoring chances each side so far and it is going to take a piece of magic to unlock this game.

1447 GMT: Well, this game is one of the tighest last 16 match-ups we’ve seen since Ghana got past the USA on Saturday – and that needed extra-time.

43 mins: You can’t help thinking this game could be heading for extra-time and penalties…

36 mins: Japan win a free-kick, Endo curls it in and Santa Cruz heads it away. The game has speeded up.

33 mins: There certainly are swatches of empty blue seats at the game. A pity. I bet thousands of fans in Tokyo and Asuncion would love to fill them.

28 mins: With the best chance of the game, Roque Santa Cruz fires wide after the ball drops to him in a goalmouth scramble.

26 mins: After that burst, the game has reverted to a midfield stalemate. But Paraguay have just won a corner.

20 mins: At the other end, Daisuke Matsui rattles the crossbar with a dipping long-range shot. They have clearly been practising with the Jabulani ball…

16 mins: Japan showed against Denmark they are lethal from free-kicks. Keisuke Honda and Yasuhito Endo both scored from set-pieces in the 3-1 win.

13 mins: Not much goalmouth action to report. Both sides are sizing each other up.

12 mins: Paraguay coach Gerardo Martino has changed no fewer than five players from the team held to a goalless draw with New Zealand in their final group match.

7 mins: Clearly it’s a big occasion for the teams too: AFP’s Jim Slater at the game says the coaches for Paraguay took it in turns to have their pictures taken by each other on the sidelines. One for the album!

5 mins: Looks as if we are in for tight and edgy affair. I should add to my earlier comments that Paraguay are also bidding to reach the quarter-finals for the first time.

1 min: Yoshito Okubo has first attempt of the match. Not far wide either.

1 min: Japan win the toss and kick off.

1357 GMT: And they are playing for the chance to meet the winner of tonight’s attractive-looking game between Spain and Portugal in the last eight.

1355 GMT: Japan are carrying Asia’s last remaining hopes at the World Cup. And this is the game that makes a moc