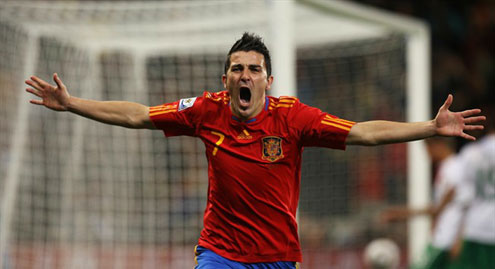 Spain booked a quarter-final date with Paraguay by beating Portugal 1-0 in Cape Town, a 63rd-minute David Villa goal proving the difference between the two sides.

Cristiano Ronaldoâ€™s wait to really make his mark at a major tournament will continue after Portugal were eliminated by neighbours Spain in the World Cup round of 16 after a 1-0 defeat on Tuesday. The 94 million-euro man arrived in South Africa vowing to confirm his status as one of the gameâ€™s most enduring talents by stamping his authority on the tournament that has witnessed the coronation of footballâ€™s true greats.

Sporadically decisive in the group phase, when he scored just once in a 7-0 thashing of North Korea, Ronaldo was unable to exert any kind of influence as the 2006 semi-finalists succumbed to Spainâ€™s fabled passing carousel.

The skipper registered Portugalâ€™s first shot on target with a typically ambitious long-range free-kick and his next dead-ball effort, from all of 37 metres, drew an unorthodox volleyball-style save from his club-mate Iker Casillas. The number seven in the white shirt cut a subdued figure in the second half as Spain tightened their grip on the match.