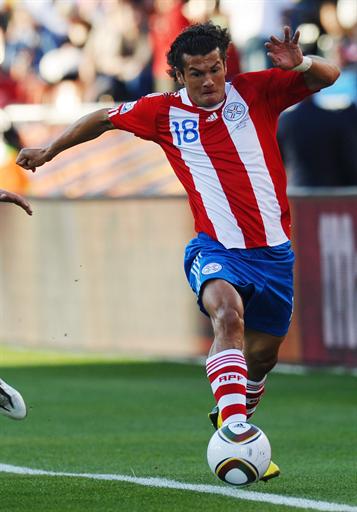 The final day of second round matches and two intriguing battles between Paraguay and Japan in the afternoon kick-off followed by Spain against Portugal in the evening.

Paraguay v Japan – Two countries looking for a first
Neither Japan or Paraguay have ever made it into the quarter-finals of a World Cup and the battle to see who achieves this milestone promises plenty of suspense.

A clash of different continents and different styles. Paraguay boast a rock solid defence who have only conceded one goal so far during the 1-1 draw against Italy. That was followed by a 2-0 win over Slovakia and a 0-0 draw against the surprising ‘All Whites’ of New Zealand.

Paraguay coach Gerardo Martino has full confidence in his back-four but will be more than concerned about his strikers who have yet to score in three matches. The goals so far have come from a defender and two midfielders while Nelson Valdez and Lucas Barrios have shown signs of their talents without yet finding the back of the net.

Japan meanwhile fell to a narrow 1-0 defeat against the Dutch but edged Cameroon by the same scoreline and then defeated Denmark 3-1 in the match that booked their place in the last-16.

Organised in defence, super-quick players and excellent in the art of the counter-attack, their star player so far has been Keisuke Honda. They are also extremely efficient from set-pieces as shown in the match against Denmark when Honda and then Shinji Okazaki who both hit the target.

Back home in Japan, millions of fans stayed up all night to catch the victory over Denmark and you can be certain the streets will be brimming again with anticipation when Japan attempt to overcome Paraguay in the battle for that prestigious quarter-final spot.

Spain v Portugal – A quarrel between neighbors
European neighbors Spain and Portugal meet at the Green Point Stadium in Cape Town for the right to play Paraguay or Japan in the last-eight. It is also a battle between the 2008 European champions in Spain and the 2004 finalists Portugal. These two teams have never met at the World Cup and it is Portugal who are the in-form team coming into the match on a 19 match unbeaten run. Both Brazil and the Ivory Coast were unable to break down the Portuguese defence in two matches that finished 0-0 but the 7-0 rout of North Korea was the determining result in their qualification for the last-16.

Despite the strong presence of Barcelona talent in the side, coach Vicente del Bosque has yet to see his team really firing on all cylinders. They also had a major scare when they crashed 1-0 to Switzerland in their opening match. However with Andres Iniesta and David Villa in their ranks, the Spanish can never be underestimated and Portugal will not take their opponents lightly.

While Portugal have looked strong in defence, coach Carlos Queiroz does not want to count too strongly on star player Cristiano Ronaldo who has been performant while not quite hitting his best. The big occassions normally bring out the best in the top players and Ronaldo will likely need to be decisive to carry the Portuguese through.