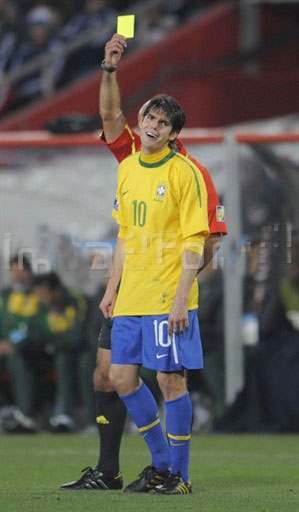 Kaka is one of a cluster of players treading a yellow card tightrope in Fridayâ€™s World Cup quarter-final between The Netherlands and Brazil.

The Real Madrid playmaker is joined by Luis Fabiano, Juan and Felipe Melo in the group of Brazilians who will miss a potential semi-final against Uruguay or Ghana if he picks up a booking in Fridayâ€™s game.

Arjen Robben, booked in Hollandâ€™s 2-1 last 16 win over Slovakia, and Robin van Persie are among the group of seven Dutch players hoping not to suffer anew the wrath of the referee in Port Elizabeth.

On the plus side FIFA has announced that for the semi-finals any bookings received in the first group round, last 16 or quarter-finals, will be cancelled.