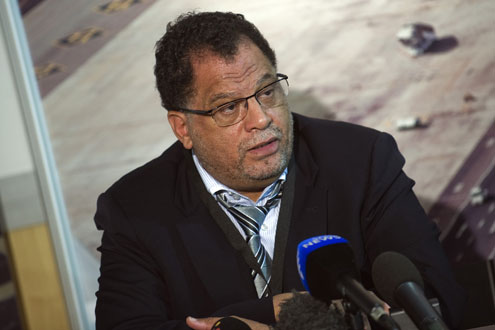 World Cup Local Organising Committee (LOC) chairman Danny Jordaan gives a press conference after the arrival of the Autsralian Football team on May 26, 2010 at the O.R. Tambo airport in Johannesburg, South Africa. Australia is the first team to arrive in South Africa ahead of the FIFA World Cup that will be played in South Africa from the 11 of June to the 11 of July. PHOTO: AFP

World Cup boss Danny Jordaan said Thursday that Ghana carried the continentâ€™s hopes as it aimed to become the first African team in the semi-finals, in the first tournament on African soil.

â€œWe have the prospect of Ghana going beyond the quarter-finals, a place where no African team has been,â€ Jordaan told reporters.

â€œThis is what we have always wanted to achieve in this African World Cup,â€ he said.

The Black Stars take on Uruguay on Friday, in a game that will grab the attention of the entire African continent.

Cameroon, Algeria, Ivory Coast, Nigeria and the hosts South Africa all bombed out in the first round of the games.