'I Have Ability In Disability' 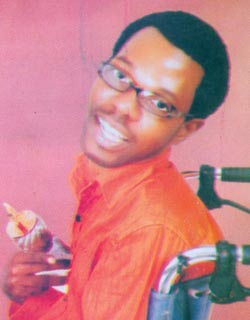 Prince Emmanuel Okuonghae Benson is a gospel musician and also an author. He has written three books so far, namely You are born to be great in life, The greatest mistake that can never be corrected and The rejected stone, while he has also composed over 100 songs. He is presently working on releasing two albums titled Symbol of Love andÂ  Christ in me the hope of Glory.

Prince Emmanuel, who is fondly called (MOG) Man of God, was born with cerebral paralysis and the doctor’s report stated that he will never be useful to himself and the society at large.

The doctors, according to him, also went ahead to advise his parents to abandon him, but they never gave up on him.

According to him, he gets his inspiration from God Almighty and has ministered in many churches both in Lagos and beyond.