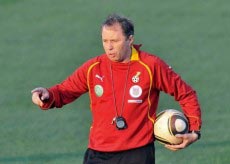 Coach Milovan Rajevac of the Black Stars of Ghana.

â€œAll I can say is this is football,â€ Ghanaâ€™s Serbian coach Milovan Rajevac said after his countryâ€™s exit from the World Cup in a penalty shoot-out with Uruguay.

â€œIt was a very difficult game for us because in the previous game we also played for 120 minutes and in the end we had the historic opportuinity to reach the semi-final and we had the penalty.

â€œWe have to be proud of what we have achieved. This is sport and justice. Today Uruguay were the lucky ones.â€

Uruguay went through after a pulsating 4-2 penalty shootout win over heartbroken Ghana at Soccer City.

Uruguay goalkeeper Fernando Muslera saved skipper John Mensah and Dominic Adiyiahâ€™s attempts after the quarter-final had been locked at 1-1 after extra time.

Ghana could have won the match in the last minute of extra-time but leading scorer Asamoah Gyan sent a penalty crashing off the crossbar after Luis Suarez had been sent off for deliberate handball on the goal-line.