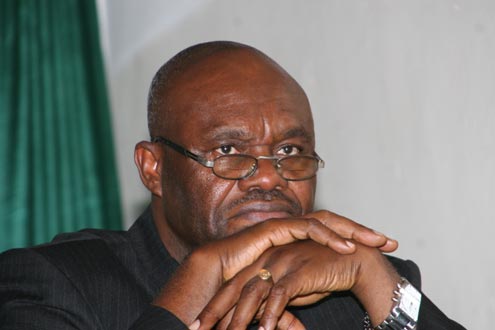 With a few hours to the deadline given to Nigeria by the Federation of International Football Associations, FIFA, to rescind its decision to suspend Nigerian teams from international competitions, P.M. News can reveal this morning why the authorities of Aso Rock took the earth-shaking decision.

Aso Rock sources told P.M.News today that government acted to dislodge an entrenched cabal that had maintained a stranglehold on Nigerian football, and that was destroying it, rather than building it. Government is blaming this cabal for all the setbacks that had befallen the national teams, especially the Super Eagles, climaxing in the poor record of the team in South Africa Mundial, where the Eagles could only notch a point, losingÂ  a winable match against Greece and drawing with South Korea.

Government was long aware there was a big problem in the soccer administration, an awareness that made government set up a special task force led by the Governor of Rivers State, Rotimi Amaechi. The task force helped the nation to qualify for the competition in South Africa, moving swiftly in several instances to cover up the bungling by the football administrators.

In a letter to FIFA president, Sepp Blatter,Â  sports minister, Ibrahim Isa Bio disclosedÂ  why the Nigerian government could no longer allow the bunch of administrators to continue to run the nationsâ€™s football: Bio penned two major constraints: â€˜administrative ineptitude and financial recklessness.â€™

P.M. News learnt that the two factors formed the bedrock of the report of the Governor Rotimi Amaechiâ€™s task force to the Federal Government, which was submitted to President Goodluck Jonathan and which formed the basis of governmentâ€™s action.

According to people privy to the report, the task force identified a cabal that is ruining and not running Nigerian football and recommended a clean sweep of the Glass House, the official headquarters of the disbanded Nigeria Football Federation. The task force exposedÂ  how the sacked soccer administrators mismanaged a FIFA assistance of $1 million and the N900 million given to them by the Nigerian government.

The Task force was said to be alarmed that in the bid to save money for their pockets, the soccer administrators booked a cheap hotel for the Nigerian squad in South Africa at a cost of $150 a room contrary to the FIFA rule of $400 a room. The administrators also chartered a faulty plane to take the squad and the officials to South Africa, endangering their lives. The task Force had to come to the rescue of the NFF by engaging the services of Arik Airline. Government is yet to pay Arik as at today for services rendered.

Sources said government was also alarmed that members of the NFF had amended their statute to remain in office in perpetuity. They first reduced membership of the NFF from 101 to 45. Then they fixed the nomination process for new elections to coincide with the World Cup when all the 45 members were in South Africa, at NFFâ€™s expense. The election rules ask contestants to download nomination forms online, but they need the endorsement of two out of the 45 members, an impossible condition since they were all in South Africa. Consequently, there are no valid nominations at the moment, which means the present corps of leaders would be returned unopposed.

â€˜What they were doing there is so blatant, so brazen that government cannot but act the way it has doneâ€™â€™, said a source close to government today.