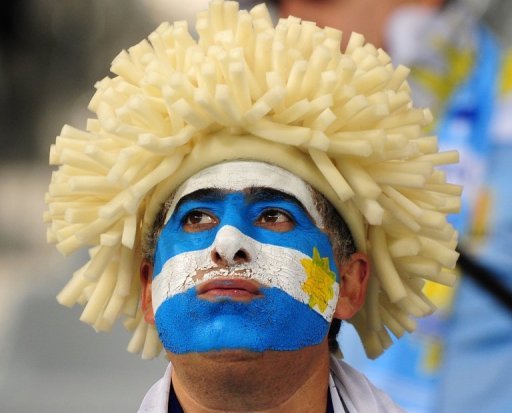 CAPE TOWN (AFP) – HOLLAND ARE INTO THE THE WORLD CUP FINAL after edging past Uruguay in a close encounter in Cape Town’s Green Point Stadium.

The Dutch have a great chance of claiming their first ever World Cup but will surely need to up their game when they come up against either Germany or Spain in Sunday’s final.

All three Holland goals bounced in off the post, and the luck certainly seems to be with them this tournament.

To see how the final place was secured, scroll down and read on.

2030 GMT: “They just about deserved it but again weren’t at their best,” ITV pundit Gareth Southgate says, before questioning the validity of Holland’s second goal.

“Van Persie’s foot was offside so by the letter of the law it shouldn’t have been a goal.”

A frantic last couple of minutes but the Dutch hold out to book their place in the World Cup final. They were not at their best, but just don’t know how to lose at the moment.

They had a huge slice of fortune, as against Brazil, but once again took full adavantage and now look forward to Johannesburg on Sunday where they have the chance of creating history by becoming the first Dutch side to lift the trophy.

90+1 mins: We are into injury time and Uruguay just want this to be over. They will have to wait three minutes.

89 mins: What a season Sneijder is having, fortune is really smiling on him at the moment. Should he add the World Cup to the treble he won with Inter Milan this season, it would surely crown the greatest season enjoyed by any player.

87 mins: Robben is clean through but takes an age before hitting a weak shot straight at the keeper.

84 mins: Uruguay can be proud of their efforts, whatever people think about the manner of the quarter-final victory, but Holland know they are there.

82 mins: A beautiful pass from Sneijder just eludes Robben as he looks to put some icing on the cake.

78 mins: They say if you can’t be good, then be lucky, and Holland’s stroke of fortune seems to have broken Uruguay resistance.

Sneijder now has five for the tournament, two of them with the aid of wicked deflections, and this workman-like Dutch team just keep on grinding out results. Such a contrast to their reputation as glorious losers. A contrast the Holland fans will revel in for should they hold out.

69 mins: Golden opportunity wasted for Holland. Van Der Vaart gets some space in the area and shoots but it is parried clear by Fernando Muslera. The ball falls perfectly for the onrushing Robben but he skies his finish into the Cape Town sky.

65 mins: What does van Bommel have to do to get booked? Another late tackle concedes a free-kick in a promising position.

62 mins: Really not much happening on the pitch, which suits the underdogs just fine. The longer this goes on the heavier the favourites tag will weigh on the men in orange.

They are exerting a little more presure, but aside from Sneijder’s horribly mis-hit volley, there are no efforts on goal.

58 mins: Robben shows a flash of his potency with a quick dart up the wing, but can only w