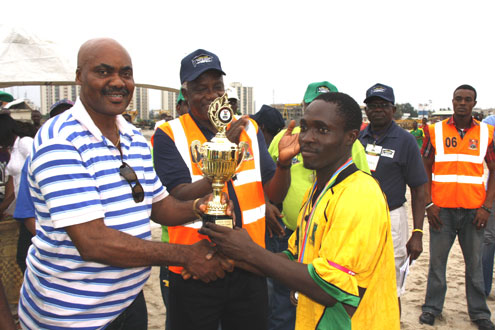 Most of the senior officials of the participating institutions who were present at the final ceremony of the 2nd edition of the Lagos Inter-Tertiary Games have commended the state governor, Babatunde Raji Fashola, for his initiative to organise the competition.

Princess Adetope Kosoko, Registrar of Lagos State Polytechnic, Ikorodu Campus, said she wasÂ  happy with the organisation of the championship and that the governor did a good job by backing the tourney.

â€œI want to thank the governor for this wonderful competition he put in place for our students. It has created healthy competition in the higher institution in the state,â€ she said.

The Sports Coordinator of Federal College of Fisheries and Marine Technology, Victoria Island, Lagos, Mr. Bankole Adekunle said his school was unknown in sports before now but the Lagos Inter-Tertiary Games has exposed his institution. â€œThis competition is the best thing that could happen to tertiary schools in Lagos. We are unknown to most people, but our participation in this tourney this year has really brought us to the limelight. I want to thank governor Fashola for this contribution to the development of sports in the country. Though we did not perform well in the just concluded tourney, weâ€™llÂ  improve our performance in the next edition,â€ he said.

Dr. A.F. Orukotan, Chairman, Sports Council, Adeniran Ogunsanya College of Education, Ijanikin, was so excited with the football gold medal his school won. The school defeated Lagos State University, LASU, 4-2 through a penalty shoot-out after they played 1-1 at regulation time.

â€œIâ€™m happy with the performance of my school. They really made us proud. My commendation goes to Governor Fashola for the foresight to come out with this kind of arrangement. This will go a long way to develop sports in the state, especially within the schools system,â€ he said.

Speaking at the closing ceremony, Mr. Kunle Ajanaku, Permanent Secretary, Deputy Governorâ€™s Office, who represented the Lagos State Deputy Governor, Princess Sarah Sosan, said the administration of Governor Babatunde Raji Fashola is aware of the talents in the higher institutions in the state, that was why the Inter-Tertiary Games was organised to discover these talents and reward them. He noted that the government has plans to consolidate on the achievements of the competition.