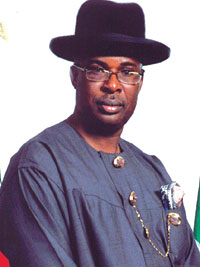 After more than two weeks of oscillating politically, allowing intense lobbying, following the impeachment of the former Deputy Governor Peremobowei Ebebi,Governor Timipre Sylva of Bayelsa State, South- South of Nigeria,has finally named the Speaker of the House of Assembly,Werenipre Seighbarugu as his Deputy Governor.

Seighbarugu, who presided over the impeachment of Ebebi is heading back into the Executive arm of Government in the state after being an Acting Governor for about Six months when the Appeal Court Tribunal in Port Harcourt annulled the 2007 Governorship election of Sylva.
He handed over to Sylva after the latter won the governorship re-run election under the ticket of Peoples Democratic Party, PDP.

During the sitting today, the members of the House unanimously endorsed their colleague, the Speaker as the Deputy Governor to succeed Ebebi who recently lost his bid to void his impeachment at the State High Court Yenagoa.

The nomination of Seighbarugu from Bayelsa Central Senatorial District confirms PMNews exclusive report about two weeks ago when we predicted that â€œPolitical observers of Bayelsa political game however, argue that the mantle may fall on Seigbarugu of Central Senatorial District following the precedence set by Ebebi who became Deputy Governor after he presided over the House that impeached former Governor Diepreye Alamieyeseighaâ€.