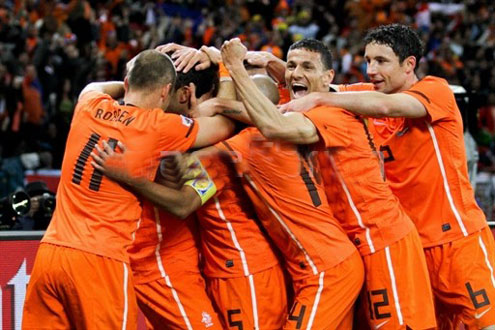 Second-half goals from Wesley Sneijder and Arjen Robben helped qualify the Netherlands for the World Cup final on Tuesday with a 3-2 semi-final win over Uruguay in Cape Town.

The match had been finely poised at half-time with wonder-strikes from Giovanni van Bronckhorst and Diego Forlan sending the sides in 1-1 at the break.

Holland began the second half in defensive mode but two further goals in three minutes, the first a deflected Sneijder strike on 70 minutes and the second a Robben header, put the Dutch 3-1 up.

A 91st minutes goal from Maximiliano Perreira then made it 3-2 to set up a nerve-shredding last few minutes, but Holland are in the final.