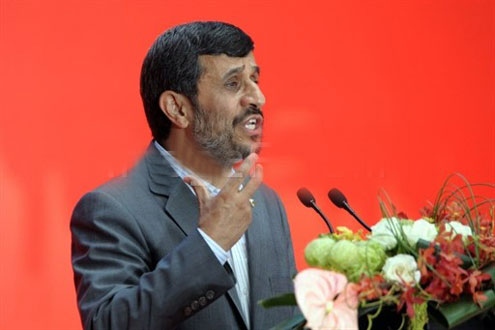 Iranian President Mahmoud Ahmadinejad on Wednesday called the United States a global dictator and lashed out at Israel after arriving in Nigeria to meet fellow Muslim leaders at a summit.

â€œThe era of dictatorship is over,â€ he added through an official translator.

The Iranian leader, whose country was recently hit with new sanctions by Western nations over its nuclear programme, said â€œthe occupiers … should dismantle their evil forces from the face of earth.â€

Ahmadinejadâ€™s appearance in the West African country, where Muslims make up an estimated half of the 150 million population, drew a rapturous welcome from the crowd, which chanted â€œNigerians support Iran.â€

â€œWe are going to put an end to the suffering of the people of Palestine,â€ he said. â€œThe Palestinian refugees will return to their homeland … soon we are going to celebrate our victory.â€

New UN sanctions were slapped on Iran last month, and both the United States and the European Union later took additional measures against Tehran unilaterally.

Western governments suspect Iranâ€™s nuclear programme is cover for a weapons drive, something Tehran has repeatedly denied, insisting it is aimed solely at power generation and medical research.

Ahmadinejad was in Nigeria to attend a one-day summit of the Developing Eight (D-8) group on Thursday in Abuja.

The Istanbul-based D-8 groups Bangladesh, Egypt, Indonesia, Iran, Malaysia, Nigeria, Pakistan and Turkey, with a total population of 930 million people. Turkish President Abdullah Gul also arrived in Abuja Wednesday for the summit, raising the possibility that damaged relations between Turkey and Israel following a deadly raid on Gaza-bound aid ships will be examined.

The D-8 was established in 1997 to promote economic ties and solidarity among member states.