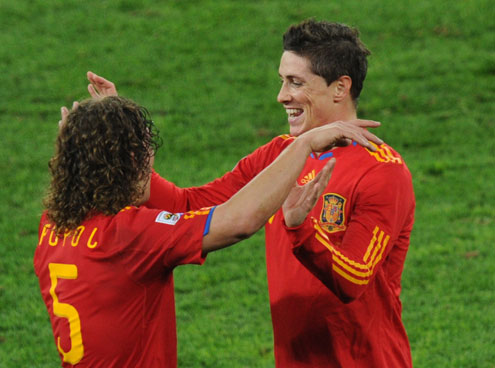 â€¢ECSTACY...Fernando Torres (right) and Carles Puyol celebrate after Spain defeat Germany 1-0 in the semi final match of the 2010 World Cup at Moses Mabhida Stadium in Durban, South Africa last night. Spain will take on the Netherlands in the final on Sunday. PHOTO: AFP.

Former African Footballer of the Year, Liberiaâ€™s George Oppong Weah says the World Cup final between The Netherlands and Spain will be a thriller on Sunday.

The final match and the closing ceremony of the ongoing World Cup will be held at the Soccer City Stadium in Johannesburg, South Africa on Sunday.

Though the former European and World Footballer of the Year had tipped Germany to beat Spain in yesterdayâ€™s second semi-final match, he admitted that the Spaniards proved bookmakers wrong.

He said that considering the performance of the reigning European champions against the Germans,Â  Sundayâ€™s final would be explosive.

The former A C Milan striker singled out Carles Puyol, who has been consistent for both Spain and Barcelona Football Club, describing the defenderâ€™s header, which sealed his countryâ€™s place in Sundayâ€™s final as fantastic.

Puyol, who always overlaps, scored Spainâ€™s winner against Germany and Weah said the goal will remain in the memory of football followers for years to come.

According to the ex-international, who contested as president of his country, Liberia, â€œPuyolâ€™s goal is out of this World. I donâ€™t think that goal would be erased in the memory of football enthusiasts for a long time to come. It would be remembered for a very long time.â€

Meanwhile, restaurants and barsÂ  in Durban and other cities in South Africa made a kill yesterday night after the Spanish national team booked their place in Sundayâ€™s final.

Our correspondent, who carried out a survey in some beer joints discovered that apart from the Spaniards who went on a drinking spree to celebrate their teamâ€™s qualification for the final. Even South Africans joined in the party as they partied all night long.