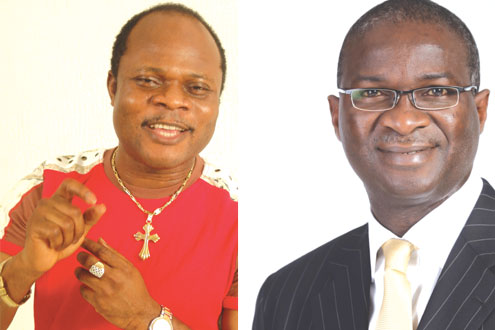 TheÂ  Governor of Lagos State, Babatunde Raji Fashola, has condoled with top movie marketer, actor and singer, Gbenga Adewusi a.k.a. Bayowa, on the death of his father, Elder Adelani Adewusi.

In a condolence letter dated 8 May, 2010, written and signed by Fashola, the governor stated that â€œI was deeply saddened and shocked to learn of the passage of your beloved father, Chief Adelani Adewusi recently at the age of 78 years.â€

He said that as a guardian angel, losing a parent could be quite painful and this is doubly so when the loss comes at a time when wise counsel, which comes with age of such parents and general presence is much appreciated.

On a final note the governor said â€œon behalf of the government and people of Lagos State, please accept my condolence once again. May God grant the soul of Papa eternal rest and endow you and the family left behind the fortitude to bear the sad loss.â€

While appreciating the governorâ€™s goodwill, Bayowa said â€œI appreciate our amiable governor for consoling me. In fact, it is a honour because, despite his tight schedule and the demand of his office, he still finds time to personally write a condolence letter to me. That shows that he is a caring and listening governor.â€

He said the remains of the deceased will be laid to rest on 6 August, 2010 in Eruwa, Oyo State. He added that it will be a celebration of life as music stars including Wasiu Alabi Pasuma, Atorise, Eleyele, Tope Alabi and Obesere, among others, will be on the band stand during the burial ceremony.

On his part, K1, who will be in Canada during the ceremony, is said to be planning a two-in-one show in honour of Bayowa, in September. The show, according to him, is expected to involve Queen Salawa Abeni.