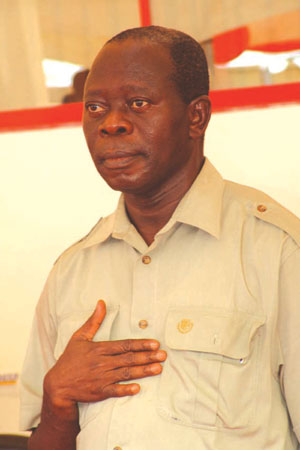 The strike embarked upon by health workers, including doctors, nurses and paramedical staff in Edo State, Nigeria entered its ninth day today.

When our correspondent visited the state hospital, Sapele road, Benin City, this morning, there was no medical personnel to attend to patients.

A sick woman, who was dumped at the gate of the hospital by her relations,Â Â  hoping she will be attended to by the medical personnel, was left to her fate.

Most of the people who came to collect corpses of their relations for burial were not attended to as the attendants were not available.

P.M.NEWS gathered that the situation was the same in Ekpoma, Auchi and other parts of the state.

Yesterday, the Chairman, Nigerian Medical Association (NMA), Dr. Enabulele Osahon, at a press briefing, vowed that doctors would continue the strike, until their demands for new salary and emoluments are met.

In a telephone interview with P.M.NEWS this morning, the Edo State Commissioner of Health, Dr. Moses Ahmed, disclosed that government had held five meetings with the health personnel and it was resolved that a committee should be inaugurated to negotiate a new salary with the workers.

The health commissioner said the Federal Government implemented the new salary for health workers on 30 June, while Edo State health workers embarked on strike on 1 July.

â€œWe told them that the strike was premature and that they should call it off and negotiate with the governor, but they refused,â€ Dr. Ahmed said, adding that the state government will do everything possible to ensure the strike was called offÂ  soon.

Meanwhile, the crisis rocking the University of Benin (UNIBEN) branch of the Academic Staff Union of Universities (ASUU) continued, as the two factions yesterday held separate congresses where their officers were elected.

The ASUU faction, led by Dr. Elabavre held their congress at the Social Sciences block of the university where they picked their executives, while the group led by Dr. Irabor also elected their officers. Both congresses were peaceful.

Dr. Orabor and Dr. Elabavre were not available for comment.

Contacted, the Divisional Police Officer (DPO), Abiodun Sokoya said the police have no business interferring with ASUU crisis as long as the congresses were held within the precints of the university and none of the factions invited the police.