The Odds Against Ebebi's Return As Deputy Gov. 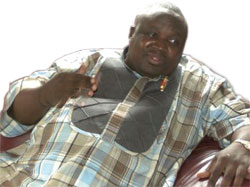 Indications are that the embattled former Deputy Governor, Peremobowei Ebebi, may have technically abandoned his office despite the confusion over the ruling by Justice Sulieman Galadima of the Court of Appeal in Port Harcourt that the status quo should remain pending the judgment of the court yesterday.

A source at the seat of government in Yenagoa told PMNEWS this morning that â€œEbebi packed out of his office complaining of lack of conducive working environment and has been operating from his residence.â€

to warn their clients not to do anything that would jeopardise the outcome ofÂ  the appeal.

As the court was in session, the state Chief Judge, Justice Kate Eberi hurriedly swore in Werinipre Seighbarugu,Â  the former Speaker of the Bayelsa House of Assembly who presided over the impeachment of Ebebi.

However, minutes after the ruling of the court, counsel to both parties in the matter gave different interpretations to it.Â  Counsel to Ebebi, Dr. Alex Iziyon interpreted it to mean that his client was still the Deputy Governor until the case was determined.

On the other hand, the counsel to the Bayelsa State Assembly, Mr. Sebastin Hon (SAN) interpreted it to mean that nothing should further be done on the matter after the impeachment.

Hon further explained that the new Deputy Governor was billed to be sworn in at 9a.m. yesterday before the sitting of the court which means that the new deputy governor would still remain in office.

The new Deputy Governor, the former Speaker of the Assembly, WerinipreÂ  Seibarugu was sworn in at about 12 noon yesterday.

Ebebi had gone to court through his counsel, Dr. Alex Iziyon (SAN) seeking interim injunction from the Court to stop the swearing in of any Deputy

Governor pending the determination of the matter and further prayed for accelerated hearing.

In addition to that Ebebi also asked for his reinstatement.

The Panel of three justices headed by Suleiman Galadima, however, told the parties to wait till October 13 when the matter comes up again to see what will become of the applications.

The Panel further asked them to ensure that all the parties, some of who were yet to be served with the processes on the matter should be served within seven days and replies by respondents also filed within 30 days for them to start the meat of the matter in the appeal.

The Bayelsa Assembly had on 24 June, impeached Ebebi who headed to the high court of the state to stop his removal. The court was said to have declined jurisdiction on the matter and Ebebi was thrown out.

Outside the Court, Iziyon argued that the interpretation there is that the matter beÂ  left as it was before the start of the legal hostilities and that means that his client is still the Deputy Governor until the case is decided.

He recalled the case of the Bauchi Deputy Governor whose impeachment was quashed by the court.

He said that at the time they were reacting to the order of the Appeal Court, the Deputy Governor had already been sworn in and the status quo is the situation before the court made the pronouncement.

At the time of filing the report,the whereabouts of Ebebi remained unknown as he been away from his Bay Bridge Road residence in Yenagoa for fear of his safety.