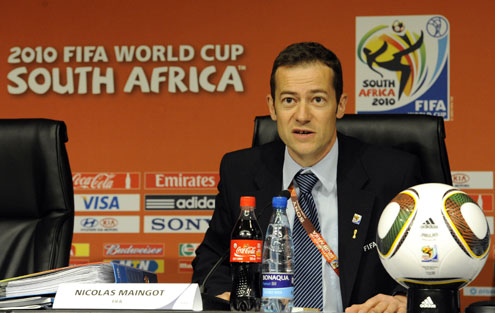 FIFA yesterday announced that tickets for the 2010 World Cup to be played at Soccer City in Johannesburg, South Africa, on Sunday has been sold out.

Spokesperson Nicolas Maingot, who made the announcement at a media briefing, said that tickets for the final have been sold to fans that are eager to watch a colourful closing ceremony of the first FIFA World Cup on African continent.

With more surprises and disappointments the football festival is coming to its finals. The magnificent surroundings of Soccer City in Joâ€™burg will host the game on Sunday, as both the Netherlands and Spain will compete to be crowned world champions.

Maingot, however, said the number of people at the stadiums in South Africa would not surpass the number who attended in Germany in the last World Cup in 2006.

The attendance at FIFA fan festivals broke through the five million mark on Wednesday night, as a record crowd came to witness the show between Spain and Germany.

It now stood at 5, 358, 267 people watching at fan fests in South Africa and across the globe.

In Berlin, about 3,500, 000 people watched Germany at the FIFA fan fest on Wednesday night, while 56 836 people attended the fan fest in Durban.

The attendance at the first World Cup on the African continent, however, was only the third to have crossed the three million mark.

Meanwhile, South African President, Jacob Zuma said there is no doubt that the final between Spain and Netherlands is going to be explosive judging from the quality of players the finalists parade.

He noted that the Dutch and Spanish teams worked tirelessly to get to the final, beating some super powers in world football enroute to Sundayâ€™s final match.

â€œSpain are a football power house that beat great teams like Germany, Paraguay and Portugal. They are facing in the final another super power, the Netherlands, who had also beaten great teams. Iâ€™m challenging the two teams to do their best to ensure that the final is explosive especially when South Africa is hosting the world,â€ he said.

â€œIâ€™m so impressed with the Spanish players like Xavi, Iniesta, Fernando Torres and the Arsenal boy Cesc Fabregas. They have given us a great championship. Netherlandsâ€™ Arjen Robben is so fantastic with his style of play and Iâ€™m sure he would give his best in Sundayâ€™s final.

â€œIâ€™m looking forward to watching an explosive final. I want to call on all South Africans to come out enmasse to watch the final with their vuvuzelas to make a wild noise to give the players the strength and energy to play their game on Sunday,â€ said President Zuma.

FIFA boss, Sepp Blatter said that he saw an improvement in the officiating of the referees in the semi final matches and he is expecting a free and fair officiating in the final on Sunday.

â€œIâ€™m expecting the referees to give us their best so that weâ€™ll have a befitting final on Sunday,â€ he said.