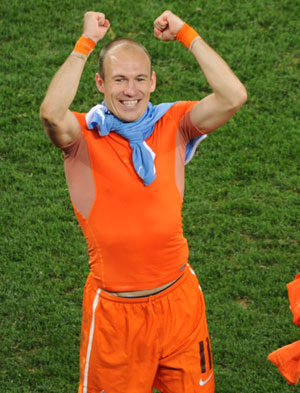 â€¢Robben: Sundayâ€™s Final will be explosive.

With barely 48 hours to the final match of the South Africa 2010 World Cup between The Netherlands and Spain at the Soccer City Stadium in Johannesburg, Bayern Munich and left winger of the Dutch national team, Arjen Robben has told Liverpool and Spanish forward, Fernando Torres to forget about the trophy.

The former Real Madrid Football Club of Spain forward recounted fond memories of his experience in the English Premier League to P.M. Sports in Johannesburg yesterday.

He said that while he was playing for Chelsea FC in England and they were playing against Liverpool, Torres usually taunted him that the Reds would carry the day.

The 26-yearÂ  old forward said with his country facing Torresâ€™ Spain in the final of the World Cup on Sunday, the Spanard should just forget about winning the trophy as all the Dutch players have resolved that nothing will stop them from winning the match.

He disclosed that the final cracker would be a fierce battle, but predicted that his side would come out victorious. According to him, â€œthe competition and the fight for the trophy have reached a climax. The only thing for us now is to take the trophy home. What is paramount in the mind of the Dutch players is for us to take the trophy to Amsterdam, Iâ€™ve also told my friend, Torres to tell all Spanish players especially my former teammates in Real Madrid like Iker Casillas, Sergio Ramos and others that they should forget about the trophy because they canâ€™t lay their hands on it, itâ€™s ours on Sunday.â€

The former Groningen of Holland forward said the entire Dutch team have resolved to give Sundayâ€™s final their all as they are in high spirits ahead of the crucial tie.

There is no doubt that Robben, who has been in his blistering form for his country, did a lot to see the Netherlands qualifying for the final of the 2010 World Cup and he is poised to ensure that the final laurel is won on Sunday. The former PSV of Holland player admitted that Torres is a good and dangerous forward, but he would ensure that the former Athletico Madrid of Spain star leaves the Soccer City Stadium a sad man on Sunday.

In his words, â€œTorres, it is a pity that you and your teammates would not have a feel of the trophy. You may have the dream and belief that you guys are going to win Sundayâ€™s match, but this wonâ€™t be. We are the world champions in waiting and there is no going back because we are destined to win the trophy this year.â€