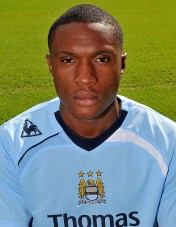 Manchester City midfielder Kelven Etuhu has been arrested after an affray in a Manchester casino.

Manchester City striker Kelvin Etuhu was arrested after three people were injured in a dispute at a casino.

The 22-year-old forward, who spent last season on loan at Cardiff City, was held on suspicion of wounding. He is due to answer bail next week.

Police were called to the 235 Casino in Manchester city centre after reports of a disturbance.

Two men, aged 24 and 26, and a 23-year-old woman were taken to Manchester Royal Infirmary for treatment to injuries. Mr Etuhu and another man, Leonard Rico Richards, 27, from Longsight, were later arrested.

Crown lawyers must now decide whether the men are to be charged. After emerging through City’s Academy ranks, Mr Etuhu made his first senior appearance in September 2007.

Competition for places meant he was loaned to Leicester City towards the end of the 2007/08 season.

He suffered a hamstring injury at the beginning of the 2008/09 season which forced him out well into the New Year.

In August last year, he was loaned to Cardiff for the rest of the season. During that loan spell he returned to City for treatment after picking up an ankle injury in December.