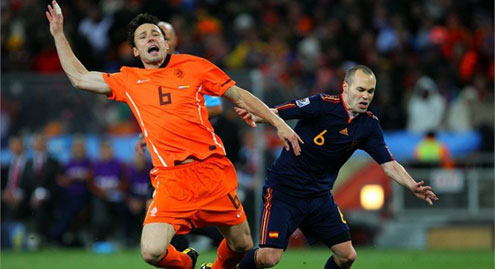 A fabulous Andres Iniesta strike after 116 minutes of a tight, dirty final handed the World Cup to Spain with a 1-0 win over the Netherlands at Soccer City on Sunday, leaving the Dutch with a great deal to regret.

Iniesta ran into the box and picked up a Cesc Fabregas pass which he fired hard and low to the bottom left of Maarten Stekelenburgâ€™s goal, sending his teammates into seventh heaven.

There were missed chances galore during normal time and extra-time began with a constant stream of Spanish pressure, which finally paid dividends against a visibly tiring Dutch side.

There were 13 yellow cards and one red the sending off going to John Heitinga of the Netherlands as English referee Howard Webb kept a tight lid on the rough tackling.