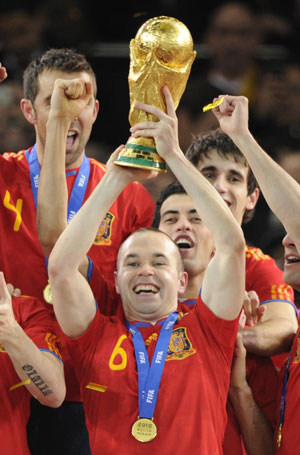 The 2010 FIFA World Cup, which ended in the early hours of today in South Africa brings sweet, bitter and everlasting memories as the first to be held on African continent, writes Tunde Oyedele from the Soccer City Stadium in Soweto.

The Federation of International Football Association, FIFA, formally closed its secretariat today after a successful 2010 World Cup in South Africa.

At about midnight, the new champions, Spain went home with their trophy after defeating hard fighting Netherlands 1-0. The lone goal came in the dying minutes of extra time through Anres Iniesta.

Iniesta, who undoubtedly is the man of the moment deserves to make newspaper headlines for handing the World Cup to his nation.

â€œThis is a good moment that I will cherish for a long time, oh! Itâ€™s wonderful and itâ€™s great to be champions of the world,â€ Iniesta told journalistsÂ  after the match. Just as Iniesta was the hero of the grand finale, goalkeeper Iker Casillas played a significant role on Spainâ€™s tough road to success.

The shot-stopper denied Arjen Robben two clear goals. He tackledÂ  the Dutch star with one-on-one saves. Casillasâ€™ moment of joy is, however, a disappointing one for Robben. â€œIâ€™m leaving South Africa a disappointed player, I had chances but didnâ€™t convert them. I think the referee also messed the night up for us,â€ Robben said.

The 120-minute power-packed final match gave the 84,490 spectators value for their money, while players of both teams exhausted all they had in terms of technique.

The first half looked a bit drab, but the last three stanzas had the flavour expected of a final, especially the hard tackles.

As Wesley Sneijder tried dissecting the Spanish defence with swinging moves during the tie, Robben and Van Persie scampered onto Spainâ€™s rear at will but wasted their opportunities.

Even, when Robben had his first clear chance, he hesitated to score and Casillas, who stood tall against the Netherlands stuck out his leg to divert his shot into touch.

What looked like a last chance for Robben to write his name in gold came in the 83rd when he beat Carles Puyol in a 50m race with the ball.

Casillas again grabbed the ball off Robbenâ€™s leg. â€œIâ€™m happy about our victory,â€ said Casillas, who completed the full set of silverware 10 years after he sensationally arrived among football greats.

While Spain are still celebrating their World Cup victory, the Dutch were left to suck the bitter part of their â€˜Oranjeâ€™ but the South Africans appear to be overall champions in a way.

As the game ended, the hosts say they are fulfilled to host the world in a grand style. â€œWe are bidding farewell to the last four of the 31 countries that came to feel the â€˜warmthâ€™ of our nation. We are proud of what we did in this World Cup,â€ Danny Jordan, the CEO of South Africa 2010 said. For the millions of South Africans who followed the games either as fans or volunteers, the nation has made a statement about the capability of this continent.

A reporter from South Korea Broadcasting Corporation, Son, told P.M.Sports that Africa is a good place to be and that left the â€˜Doubting Thomases from across the world was surprised when they saw what South Africa put in place.

â€œThe 2010 World Cup was a great moment that I will remember for a long time to come. Africa is safe and I can testify based on what happened here,â€ Son said.

It was no exaggeration that this yearâ€™s World Cup is the best ever, at least FIFA confirmed that fact.

â€œSouth Africa made us proud, we were well hosted and I believe the participants, including FIFA, had a swell time. I salute the continent for lifting the standard of the tournament this year,â€ FIFA President, Joseph Sepp Blatter said.

The result of what happened here in South Africa for the past one month goes to explain that Africans, including Nigeria, can achieve their greatest potential in the comity of nations, not just in football alone.

The World Cup in South Africa was also historic. Spain won it for the very first time in their football history. Netherlands have never lifted the Jules Rimet Cup in 70 years of its existence in FIFA calendar.

Spain also played in their first-ever final since the inception of the Cup. The Netherlands ended as runners up again just as they did in 1974 and 1978, making their third final in about 30 years.

Another historic moment was the influence that Vuvuzela played in the support given to the teams by the hosts.

The fans ensured that they were present at all the matches, creating a record for Africa. 2010 World Cup was the most watched, with an average of 48,000 fans per game.

What are the people who once said South Africans are too inclined in rugby, and are not interested in football, now saying?

These are the people who defied high prices of nearly everything and the discouraging cold weather to rally support for the participants in their numbers.

The fact that South Africa were the first-ever hosts to be knocked out in the first round did not deter them.

The skipper of Italy, Cannavaro, who delivered the World Cup before last nightâ€™s kick off applauded the hosts: â€œIâ€™m indeed happy to witness this exciting end of the World Cup.

â€œItâ€™s amazing that the hosts came out in large numbers despite the ouster of Bafana Bafana. We know how hosts behave when their teams crash out, South Africans are really wonderful peopleâ€.

South African President, Jacob Zuma described the World Cup as the best thing to happen to the nation. From his statement, not even the release from prison of Nelson Mandela and the first democratic elections were as electrifying as the tournament.

â€œI must confess, the 2010 World Cup was great. As important and epoch-making as the release of Mandela and the first elections were; they were not as unifying as this World Cup to our people.â€

The exit of South Africa, Brazil, Argentina and Nigeria did not take shine away from last nightâ€™s final. It was a final to remember. Now, the beautiful game has ended on a bright note with sweet, bitter and everlasting memories in South Africa. Attention now shiftsÂ  to Brazil, where the disgraced teams have another chance to redeem their images in 2014.