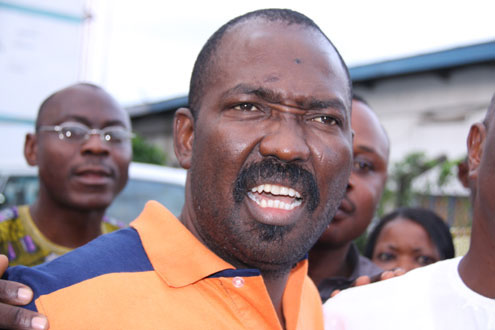 The whereabouts of the Chairman, Lagos State Chapter of the Nigeria Union of Journalist, NUJ, Mr. Wahab Oba and four others remained unknown this morning 24 hours after they were taken hostage by unidentified gunmen.

Wahab, three journalists and the driver were kidnapped around 10 am yesterday by unknown gunmen in Aba, Abia State, Nigeria, while the kidnappers have demanded for N250 million ransom.

Seven other journalists narrowly escaped death when the gunmen sprayed their cars with bullets and deflated the tyres in a bid to force them to stop.

Speaking with P.M. NEWS this morning, Elumoye said the kidnappers called him yesterday to tell him that they were holding â€œour chairman hostage,â€ adding that he was allowed to speak with Oba for one minute and that before Oba could clarify some issues, the kidnappers cut off the line.

Elumoye said that the union had contacted the Director General, State Security Service, SSS and the Inspector General of Police, IGP over the issue, saying that he personally spoke with the IGP and was assured that the criminals would be arrested and brought to book.

Wahab and others were kidnapped in Aba while coming home after the end of the National Executive Council, NEC, meeting of the union held in Akwa Ibom State.

State Commissioner for Information, Akwa Ibom, Mr. Aniekan Umanah had broken the sad news to other members of the NEC and it ushered in a period of gloom and sadness all over.

Wahabâ€™s wife, Barakat, who was shocked, said her husband contacted her around 6.30 a.m. yesterday to tell her he was preparing to come home after the NECmeeting had ended.

â€œI called him around 6.30 am this morning (Sunday).Â  All of a sudden, I couldnâ€™t reach him again and I became apprehensive.Â Â  The situation was like that until my younger brother called to intimate me that the NUJ president called that something happened when my husband was coming along Uyo road,â€ she said.

The NUJ President, Mr. Muhammed Garba described the kidnap as unfortunate, incredible and unbelievable, saying that â€œwe have established contacts with the IGP, the Akwa Ibom State Commissioner of Police, the DG, SSS and the Minister of Information, Prof. Dora Akunyili and we have been assured that nothing will happen to them.â€