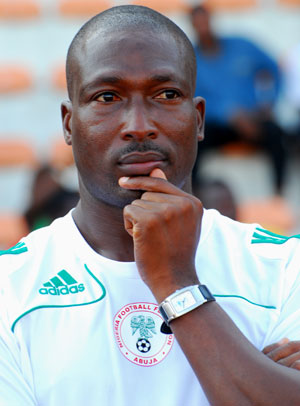 Contrary to reports in the media that the Golden Eaglets preparing for next yearâ€™s African Junior Championship, AJC, in Rwanda were locked out of their camp, the FIFA Goal Project site in Abuja on Tuesday, Chief Coach of the team, Monday Odigie says the report was untrue.

A media report had it thatÂ  Abigail Idakwo, secretary to the dismissed former President of the Nigerian Football Federation, NFF, Sani Lulu on Tuesday denied Eaglets access to their camp. But Odigie toldÂ  P.M.Sports that there was no iota of truth in the report.

The former Bayelsa United gaffer said the report was the handiwork of some people who want to distract his team, adding that he is not ready to join issues with anybody, but rather concentrate on the job at hand, which is to make sure that Nigeria qualifies for Rwanda 2011 AJC.

Odigie, who was part of the coaching crew of the Golden Eaglets, who won silver medal when Nigeria hosted the FIFA Under 17 World Cup tagged â€œNigeria 2009â€, said prior to the Nigeria 2009 World Cup, worse things had been written about the technical crew led by ex-international, Henry Nwosu, (MON) but they were undeterred. Odigie, who also worked as an assistant to Samson Siasia at the Beijing 2008 Olympics frowned at the way some sports journalists go about their job, saying as professionals they shouldÂ  verify information before publishing.

The former Nigerian Coach of the Year award winner said: â€œIf it were not because you are my friend, I wouldnâ€™t have picked your call because I was just reading the news that we were denied access to our camp.

â€œI must confess, the writer of the story didnâ€™t get the information correctly. I donâ€™t think itâ€™s fair to the woman who is in custody of our belongings, and for Godâ€™s sake, she has been giving us food. She has been behind us all this while. There is no iota of truth in that report. This was the handiwork of our enemies.â€