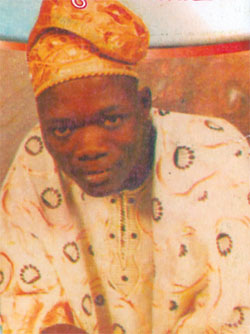 Apebiowo, who hails from Port Novo in Benin Republic and plays the late Ayinla Omowuraâ€™s type of apala music, said he intends to take the music genre to greater heights as well as take the music scene in Nigeria by storm.

He added that the 12 tracker recorded and produced here in Lagos, Nigeria, is set to compete very well with his Nigerian counterparts in every aspect of apala music considering the quality of its composition, arrangement and production.

Dignitaries expected at the occasion, according to him, include Alhaji Nureni Adisa Okeowo, Tokunbo Oliyide, Apostle Ikhana, Adunbarin and Olaoye as fathers of the day, among others.