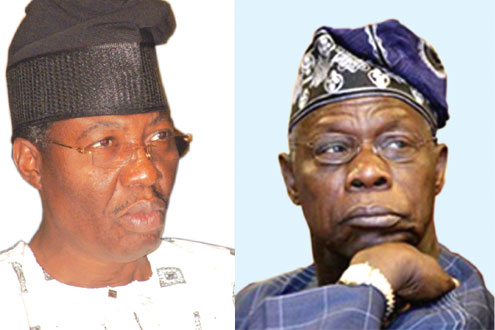 Peace talks between the fractured Peoplesâ€™ Democratic Party (PDP) in Ogun State, South West Nigeria, has again broken down, following the disagreement between the leaders of the party, including former President, Chief Olusegun Obasanjo and Governor Gbenga Daniel.

Political Train exclusively gathered thatÂ  after the peace talk of over three hours in the government house, Oke Igbehin, Abeokuta recently, Chief Obasanjo and Otunba Daniel were said to have differed on the choice of the partyâ€™s governorship candidate in 2011.

It was however, learnt that both the immediate past president and the governor supported a Yewa candidacy for the stateâ€™s number one seat in the next election, but they disagreed who should be the party’s flagbearer, while the Omo-Ilu group is said to be routing for an Egba candidacy.

General Olurin (retd) who hails from Ojuokeke quarters in Ilaro, Yewa South, Ogun State was appointed by Obasanjo as sole administrator of Ekiti State in 2006 when the then governor, Ayo Fayose was impeached.

Gboyega Isiaka, a strong member of governor Danielâ€™s â€˜kitchenâ€™ cabinet, who resigned in May this year to pursue his ambition is said to come from the Ayetoro axis, Yewa North Local Government Area of Ogun State.

The Awori led by Hon. Waliu Taiwo, the sacked Commissioner for Agriculture in the state who had since mended fences with his boss, are also said to be eyeing the governorship seal in the toga of a Yewa/Awori ticket.

As at the time of this report, Obasanjo whose two candidates as minister nominees were approved by the senate and confirmed by the federal government, insisted on Olurin as his candidate.

Governor Daniel on his part has been spreading his tentacles to woo top politicians in other parties in the state to strengthen his political base in readiness for the battle against his opponents in 2011.

OGD has also been holdingÂ  stakeholders meetings with party loyalists, local government chiefs, traditional rulers and community leaders to build a broad-based political structure for the task ahead.