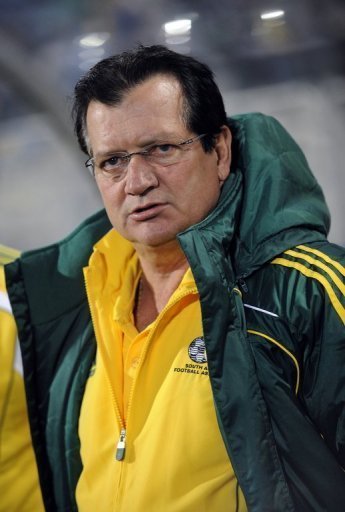 The announcement at a national football association news conference in Johannesburg was widely expected as 45-year-old Mosimane has been a Bafana Bafana (The Boys) assistant coach for four years.

Hosts South Africa were eliminated in the first round of the just completed World Cup after drawing with Mexico, losing heavily to Uruguay and defeating France.

Parreira, coach of the 1994 Brazil World Cup-winning team, indicated when he took control of South Africa a second time last November that he would step down after the World Cup.

“I have taken this job not to turn things upside down but will make changes if necessary, even if they are unpopular,” warned Mosimane. “I am ready to take Bafana Bafana to a higher level.”

Egypt have won the last three Nations Cup tournaments and west Africa minnows Sierra Leone triumphed at home and drew away when they faced South Africa in qualifiers for the 2010 African tournament.

Long-time whipping boys Niger showed dramatic improvement this year with the national team qualifying for the local footballers-only African Nations Championship in Sudan next year at the expense of Nigeria.

National football association spokesman Leslie Sedibe said performance clauses set for the new coach in a four-year contract included qualifying for the 2012 and 2013 Nations Cup tournaments and the 2014 World Cup.

“Pitso understands fully the performance goals he has to meet. We are impressed and confident he can achieve them,” he said without explaining what would happen if a goal was not met.

Mosimane inherits from Parreira a team ranked joint 66 in the world beside Macedonia and 12 in Africa behind powerhouses like Egypt, 2010 World Cup quarter-finalists Ghana and Ivory Coast.

He has hinted that South Africa should use two strikers rather than the one favoured by Parreira while several pundits believe error-prone centreback and captain Aaron Mokoena must be axed.

South Africa play a friendly against Ghana on August 11 in Johannesburg, open their Nations Cup campaign at home to Niger in Nelspruit the following month and travel to Sierra Leone during October.