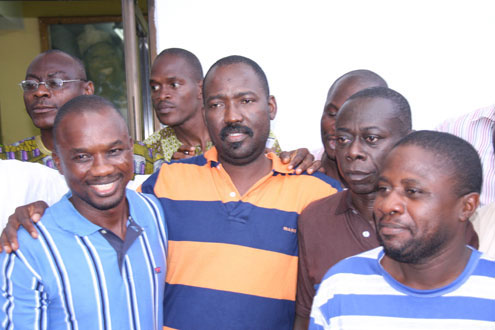 The four kidnapped journalists and a driver who were released yesterday by their captor in Abia State, Nigeria have narrated how they survived the kidnappersâ€™ hell.

According to them, their travails in the hands of the criminals were like going through hell as they were chained always in the forest by the kidnappers.

They said they had already given up hope of ever coming out of their travails alive as each passing day smelt death for them.

They said their captors made life difficult for them and always shouted at them to bring in the money on time, adding that they were simply helpless in the hands of the kidnappers.

â€œUntil 2 am on Sunday, we never knew that we will be alive, every minute were moments of agony, pains, frustration and dejection. We were always in chains because they feared that we might escape at night and we have to be begging them to release the chains a little bit to allow us to breathe,â€ said Mr. Wahab Oba, Chairman, Lagos State Council of the Nigeria Union of Journalists, NUJ.

â€œWe were always moving every two hours whenever they felt the police were closing in on them. We would also like to thank the president for giving the police the directive that we must be found. Until the early hours of yesterday, we never knew we will be alive.

â€œEvery day, we knew that the police were always close on our heels but they were always frustrated because of an informant in the community who is always calling in to inform them of the presence of the police which will necessitate our movement at short notice.

â€œAt times they would come to say the police are coming after them using big helicopters and all kinds of things, we too felt the police were closing in on them,â€ he added.

The chairman suspected that the informant obviously lived within the community, â€œbut it became obvious that the bush was becoming very tough and scary even for them because of the pressure being mounted by the police. They had to come to the conclusion to release us when it was very obvious that they cannot survive.â€

Wahab explained that the kidnappers were well armed when they were kidnapped, saying that when the police on duty heard the buzz of guns, they ran away, leaving them to their fate.

According to him, â€œthere was a time that they tied something round my neck and someone told me that they were going to sacrifice me to the gods. At that time, I concluded and I told Shola to tell my wife not to bother about me anymore. When they started shouting â€˜chairmanâ€™, I knew that I might not come back alive.

â€œ I thought that was the end. Adolphus was weeping profusely. On Friday, we fasted and God answered our prayers. We were usually tied with chains in the night. We only slept in the morning. They tied us with chains because they felt we would run away.â€

The NUJ chairman praised the gallantry of the Nigerian police, saying they were now working well, adding that â€œI can attest to this despite their lack of equipment. They approached the issue professionally and scientifically.

â€œOnce again, I commend the Nigerian police and I want the government to urgently look at how to improve their welfare. These people are so daring in the type of weapons they carry, Federal Government must improve the police.â€

Wahab disclosed that the kidnappers dropped a note with them conveying whatÂ  they wanted Nigerians and the Federal Government to be aware of;Â  a plight which drove them into the kidnapping business.

He quoted the kidnappers as saying that if they were gainfully employed they would not be thinking of engaging in the kidnapping business, saying that they were ready to change from their nefarious ways of living if decent jobs were given to them.

According to Wahab, the kidnappers decried the poor state of infrastructure in Abia State which they attributed to the inability of the state government to develop the state.

The driver of the NUJ vehicle, Mr. Yekini Azeez, said the kidnappers first took his handset and searched him thoroughly and took them into the bush and tied them to the ground.

Adolphus Okonkwo, Zonal Secretary of the union, simply described their travails as horrible. Mr. Sola Oyelipo, another kidnapped journalistÂ  thanked God that he was alive to tell the story, saying that â€œwe eat once in a day. We were not thinking we will come back alive. The only thing I was agonising about was that I didnâ€™t have the chance to talk to my wife before I die. I was already sure that I was going to die. Why will I die without saying a word to my wife?â€

Police Public Relations Officer, PPRO, Mr. Frank Uba, assured Lagosians that the Police Command would continue to do its best to protect them, adding that â€œthose things that have kept kidnappers out of Lagos, we will continue to do them. Lagosians should have no cause to panic.â€

National President, NUJ Mr. Mohammed Garba commended the police for handling the matter professionally, stressing that for the Inspector General of Police to have relocated to Abia and held a two-hour meeting with us showed their commitment to resolve the issue.

â€œ I must at this juncture call on the Federal Government to take the issue of welfare and provision of equipment for the police very seriously.â€