Falconets Round Off Training Ahead Mexico Clash 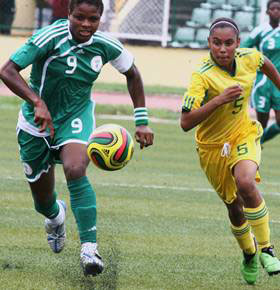 Nigeriaâ€™s Super Falconets will round off their training this evening ahead of their last group match in the ongoing Germany 2010 FIFA U-20 World Cup.

The Nigerian ladies will battle Mexico tomorrow, and need at least a draw in the crucial match to book their place in the quarter final of the tournament. PM Sports gathered that Coach Ndem Egan is leaving nothing to chance to ensure that the team are well prepared for the match which the Mexicans are looking forward to winning to progress in the women tourney.

The coach worked on the girls to ensure accurate passes. He also warned them on the need to play as team and guard against repeating mistakes from previous two matches against England and Japan.

â€œAs I said after our opening draw with England, my players have a winning mindset,â€ Egan was quoted as saying on fifa.com. â€œIn the first game [the 1-1 draw against England], all we were lacking was that little bit of luck. We need to claim three points. Against Japan our game clicked into place right from the kick-off, and we overcame them with our strength and speed.

â€œIâ€™m very pleasedÂ  with my players. But we now need to focus on Mexico, our upcoming opponents. Weâ€™re notÂ  there yet; we need to be sure of our place in the next round in the final group match.â€

Given the form of Nigeriaâ€™s front two, Ebere Orji and Desire Oparanozie, it wonâ€™t be hard for the team to scale the last hurdle tomorrow.

â€œWe try to stamp our style of play on games, by controlling possession and attacking in numbers,â€ says Orji, who has had a hand in all three goals the Falconets have scored so far. â€œMany of the players in the squad know eachother from the New Zealand 2008 campaign and that familiarity extends to the field of play.

â€œI want to help my team with my ability to put the ball in the net, but at the moment Iâ€™m not having much luck in that department. I am happy to have played some part in the goals though.â€