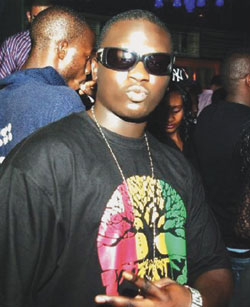 Multiple award winning artiste, Wande Coal, has denied the controversial nude pictures of his which appeared on social network sites including Facebook and Twitter recently.

The pictures allegedly showed him lying naked on a bed.

According to him, there is no way the person in the picture could have been him, adding that whoever was responsible for spreading the â€œliesâ€ must have used Photoshop, a programme on computer, to superimpose his head on another naked manâ€™s body.

Coal, the Bumper 2 Bumper crooner, who was speaking during a media briefing in Lagos, revealed that he and his attorneys were still investigating the matter and would proceed with legal actions once they have been able to identify those behind the circulation of the pictures.

Reacting to the issue also, Dapo Daniel Oyebanjo, popularly known asÂ  Dâ€™banj, who said he was in the United States when he heard the news, lamented that people could descend so low to do things that are capable of extinguishing the glittering career of Wande Coal.

He described Wande as a humble, talented young man who all members of the Moâ€™ Hits are proud of.

He also claimed that the controversy had catapulted Coal to international stardom, as the news recorded over one million hits on twitter within the first two hours, making him the first African to achieve such a feat.

Coal also used the occasion to disclose that he has concluded arrangements to set up an official website and fan page on Facebook as a way of reaching out to his millions of fans who may not have the opportunity to meet him face-to-face.

He said the site would be managed by The Quadrant Company, the official PR company for Moâ€™ Hits Records.

On the Facebook page, members of the group would have the opportunity to interact with him one-on-one on several issues relating to his personal life, his career and his life before he became a star.

The page will also contain pictures and videos of the artiste, including links to videos of songs from his current and past albums.