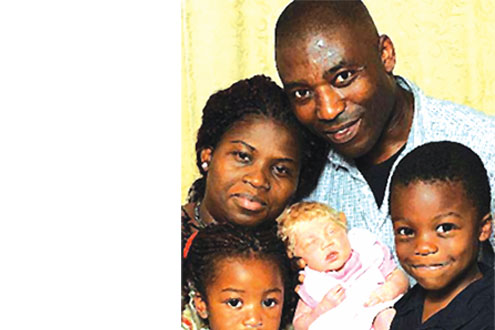 â€¢Angela and Benjamin Ihegboro with their white daughter, Nmachi and their older children. PHOTOS: The Sun.

A Nigerian couple has amazed medical experts in Britain after the coupleâ€™s baby daughter was born with white skin, blue eyes and blonde hair.

Benjamin and Angela Ihegboroâ€™s daughter, Nmachi, has flummoxed genetic experts who are unable to explain why she looks the way she does.

Most daily newspapers in the United Kingdom, the Sun, the Telegraph, the Daily MailÂ  reported the amazing birth this morning.

The Daily Mail online quoted doctors as saying that the white-skinned newborn is not an albino. The blonde, blue-eyed girlâ€™s Nigerian parents say they donâ€™t know of any white ancestry in either of their families.

Father Ben Ihegboro, 44, a customer services advisor, admitted that when he saw the baby he exclaimed â€˜What the flip?â€™ before joking: â€˜Is she mine?â€™

Doctors at Queen Mary Hospital in Sidcup insist that Nmachi – whose name means â€˜beauty of Godâ€™ in the coupleâ€™s native Igbo language – is not an albino.

Her stunned parents, who already have two black children, just â€˜sat and staredâ€™ at their white baby when she arrived, they told The Sun last night.

Despite jokingly asking whether he was the father, Mr Igegboro said: â€˜Of course she is mine.My wife is true to me. Even if she hadnâ€™t been, the baby wouldnâ€™t have looked like that!â€™

Pale skin genes can skip generations but neither Ben nor Angela Ihegboro – who only moved to Britain five years ago – know of any white heritage in either of their families.

â€˜She doesnâ€™t look like an albino child anyway,â€™ Mr Ihegboro said. â€˜Not like the ones I have seen back in Nigeria or in books. She just looks like a healthy white baby. My mum is a black Nigerian although she has a bit fairer skin than mine. But we donâ€™t know of any white ancestry. We wondered if it was a genetic twist. But even then, what is with the long curly blonde hair.â€™ Genetics professors expressed amazement at the birth last night.

â€˜The birth is extraordinary,â€™ said Professor Bryan Sykes, head of human genetics at Oxford University. â€˜In mixed race humans, the lighter variant of skin tone may come out in a child and this can sometimes be startlingly different to the skin of the parents.â€™

Professor Sykes said both parents would have needed â€˜some form of white ancestry.â€™

He added: â€˜The hair is extremely unusual. Even many blonde children donâ€™t have blonde hair like this at birth. The rules of genetics are complex and we still donâ€™t understand what happens in many cases.â€™ This might be a case where there is a lot of genetic mixing, as in Afro-Caribbean populations.

The couple also have an older daughter, Dumebi, two, and a son, Chisom, four. Mr Ihegboro said the coupleâ€™s son was even more confused than them.

He added: â€˜Our boy keeps coming to look at his sister and sits down looking puzzled.

â€˜We are a black family. Suddenly he has a white sister. But all that matters is that she is healthy and that we love her.â€™

Yesterday mum Angela admitted that she was â€œspeechlessâ€ at first seeing her baby girl, who was delivered in a caesarean operation.

She said: â€œI thought, â€˜What is this little doll?â€™ Sheâ€™s beautiful and I love her. Her colour doesnâ€™t matter. Sheâ€™s a miracle baby.Â  â€œBut still, what on earth happened here?â€

Her husband told how their son Chisom, four, was even more confused than them by his new sister. Ben said: â€œOur other daughter Dumebi is only two so sheâ€™s too young to understand.

â€œBut our boy keeps coming to look at his sister and then sits down looking puzzled.â€

Ben continued: â€œOf course, we are baffled too and want to know whatâ€™s happened. But we understand life is very strange.

â€œAll that matters is that sheâ€™s healthy and that we love her.Sheâ€™s a proud British Nigerian.â€

Queen Maryâ€™s Hospital said: â€œCongratulations to Angela and her family on the birth of their daughter.â€

Skin colour is believed to be determined by up to seven different genes working together. If a woman is of mixed race, her eggs will usually contain a mixture of genes coding for both black and white skin. Similarly, a man of mixed race will have a variety of different genes in his sperm.

When these eggs and sperm come together, they will create a baby of mixed race. But, very occasionally, the egg or sperm might contain genes coding for one skin colour. If both the egg and sperm contain all white genes, the baby will be white. And if both contain just the versions necessary for black skin, the baby will be black.

In 2006 a British mixed race couple last year gave birth to twin girls, one of whom was white and the other black.

Both Kylie and her partner Remi Horder, 17, are of mixed race. Their mothers are both white and their fathers are black.

But the chances of the twin girls having completely different skin colours was one in a million.

According to the Multiple Births Foundation, baby Kian must have inherited the black genes from both sides of the family, whilst Remee inherited the white ones.

Kylie, now 23, and her partner Remi Horder, now 21, are both mixed race. Even so the odds were estimated at a million to one.

The Sun reported how in 2002, a white couple had Asian twins after a sperm mix-up by a fertility clinic.