Another Nigerian Couple With White Baby 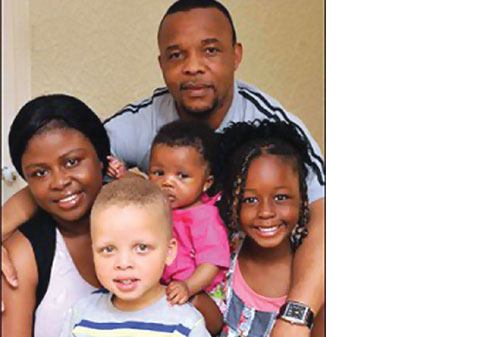 Two days after the amazing birth last Sunday of a white baby to a Nigerian couple in England, another Nigerian couple has emerged in the same country with the incredible story of giving birth to a white child, the SUN newspaper of Londonreported today.

The Nigerian couple Ethelbert and Nkemakonam Ofor, both black and who live in Middlesborough said they had their child, fair-haired, green-eyed Emmanuel in February 2007.

According to the SUN, Emmanuelâ€™s mum is still baffled by the colour of the three-year old child and is still in search of an explanation â€˜for the genetic mix-up.â€™

The same Sun newspaper published last Tuesday the birth of blonde, blue-eyed Nmachi to Ben and Angela Ihegboro, who believe they have no white ancestry. Now, the Ihegboros said the baby girl will undergo full genetic tests after doctors said the odds of her white colouring were â€œbetween many millions to one and a million to one.â€

The new revelation, Emmanuel – whose two sisters, Afoma, six, and six-month-old Whitney are both black – is also beginning to wonder why he looks different.

Dad Ethelbert, 43, said yesterday: â€œIt is something genetic but we donâ€™t know what.

â€œEmmanuel has got to the age where he is questioning why he is white and his sisters are black. We have to tell him that we just donâ€™t know the answer.â€

Mum Nkemakonam, 34, said nurses gathered round in amazement when she gave birth to Emmanuel in February 2007.

She revealed: â€œI was shocked as well – but not as much as everyone else.

â€œI have a distant cousin back home in Africa who had been born white to black parents as well, so I knew it could happen.â€

Neither five-day-old Nmachi, of Woolwich, South London, nor Emmanuel, who lives n Middlesbrough, are albino.

Ethelbert, a psychiatric nurse originally from Nigeria, said of his sonâ€™s birth:

â€œI think the medical staff were concerned about how I would react. They didnâ€™t warn me about his colour, and when I saw him for the first time they were looking very closely at my expression.

â€œThey then asked me if I was happy and I told told them, â€˜Of course Iâ€™m happyâ€™.â€

Like his wife, Ethelbert also has a distant relative in Africa born white to black parents.

He admits that some cruel people have urged him to get a DNA paternity test.

But Ben and Angela Ihegboro have agreed to let geneticists study their daughter Nmachi born on Sunday, to find out whether the couple has a link to caucasian ancestry.

Geneticist Dr Mark Thomas, of University College, London, said the odds of the babyâ€™s white colouring were â€œbetween many millions to one and a million to oneâ€.

He said: â€œI suspect thereâ€™s been a mixture of a mutation, like albinism, combined with a dormant white gene.â€

said:Â  â€œIn mixed race humans, the lighter variant of skin tone may come out in a child â€“ and this can sometimes be startlingly different to the skin of the parents. This might be the case where there is a lot of genetic mixing, as in Afro-Caribbean populations. But in Nigeria there is little mixing.â€

â€œThe hair is extremely unusual. Even many blonde children donâ€™t have blonde hair like this at birth.â€

A Nigerian doctor based in California, United States of America said he was not surprised by such births.

In an e-mail sent to one ofÂ  the senior editors of P.M. NEWS, Dr. Olufemi Ogundipe said the birthÂ  â€œmay not be a miracle and neither of the couple need â€˜have strayedâ€™ or â€˜have fallen offâ€™ the wagonâ€™.

â€œWhat is needed to prove what could have happened is the genome analyses of the child, and each of the parents.

â€œWorld-renowned medical geneticist and current NIH director, Francis S.Collins in his most recent book, The Language of Life . DNA and the Revolution In Personalized Medicine gave an account of an American man who looked black and suffered all the usual indignities suffered by a black man in his community turned out after genomic analysis to have no black ancestry.

â€œFurthermore,Â  the story about 2-3 years ago when American John D, Watson (co-winner with British Francis Crick of Medicine Nobel Prize for their work on the double helix structure of DNA) created a firestorm when he pontificated on the inferiority of black people. To his own chagrin, his own genome analysis done some 3 weeks later showed that genetically he was a black man. Some food for thought there! The landmark human genome analysis will in addition to advancing the frontiers of Medicine will unearth many inconvenient truths about race. Welcome to the 21st century.â€