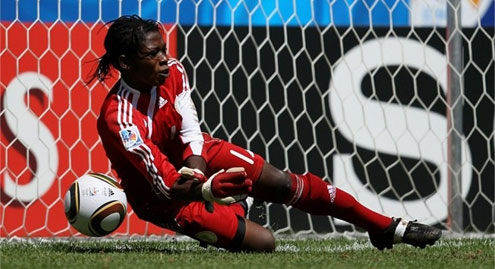 Nigeriaâ€™s Falconets today eliminated Cup holders USA 4-2 after penalty shootout to advance to the semi final of the FIFA U-20 Womenâ€™s World Cup in Germany.

The Nigerian girls, who conceded an early goal from the Americans, fought back to end proceedings 1-1 at both the regulation and extra time before defeating their opponents during the spot kicks.

Desire Oparanozie and Ebere Orji had few chances but failed to trouble the American goalkeeper throughout the first half of the tension soaked encounter.

Esther Sunday tested USA goalkeeper, Bianca Henninger and failed to beat her but hard fighting left back, Helen Ukaonu equalised for Nigeria via a ferocious freeâ€“kick with only 11 minutes left to full time.

Orji volleyed the ball to Ukaonu and she let fly a powerful rocket that sailed into the roof of the net for a memorable equaliser that changed the match in favour of the Nigerians.

The game ended 1-1 at the end of the pulsating 90 minutes and no goal was recorded after 30 minutes of extra time. However, Esther Sunday scored from the spot and became the first player in FIFA history to play a penalty three times while Esther Michael, Desire Oparanozie and Joy Jegede netted their kicks.

Sadly for the USA, Christian Nairnâ€™s kick was saved by Nigerian keeper, Alaba Jonathan while Sydney Leroux missed her kick, which helped Nigeria to advance to the last four in the tournament.

Before now, no team had been able to stop the â€˜mightyâ€™ United States from reaching the semi finals of the FIFA U-20 Womenâ€™s World Cup since the competition started in 2002.

Thatâ€™s a record created by the determined Nigerian girls. The Americans looked unstoppable in the early minutes with deft moves that unsettled the Falconets, and deservedly took the lead after only 9 minutes following poor defending off a corner kick.

In Bangkok six years ago, the Falconets tied similarly with Germany at the same stage and lost on penalty kicks, but this year, they refused to give up.

Meanwhile, as the Nigeria contingent depart Augsburg for Bielefeld for the semi final against Colombia on Thursday, President of Nigeria Football Federation, NFF, Alhaji Aminu Maigari has expressed delight over Falconetsâ€™ triumph against USA, saying the girls will now target the Final match.

While presenting his congratulation to the history-making Falconets, Maigari said: â€œOur girls did a great job overcoming the defending champions and we must praise them.

â€œIt is not easy. Determination and confidence played a key role in their game and these must still guide them as they go up against Colombia in the semi final. They cannot afford to underrate any team.

â€œFor the Colombians to have beaten the impressive Swedes 2-0 meant they are indeed a good team. Our team must be at their best for the Colombians. They cannot afford to get this far and then bungle it. â€œIâ€™m charging them to go for the Cup, but it is important that they take the match at a timeâ€, said the NFF boss.

South korea will confront host, germany in the second semi final after defeating
Mexico 3-1 in the last quarter final match played this evening.