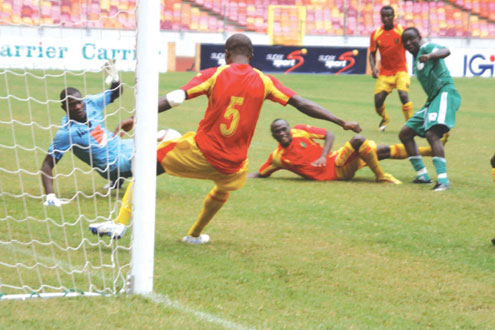 Former coach of U-23 Eagles, Samson Siasia was mobbed by soccer fans at the Abuja National Stadium on Saturday.

Siasia, the current coach of Heartland Football Club of Owerri was at the stadium to watch the African Youth Championship, AYC between Flying Eagles and Junior Syli Nationale of Guinea. However, his arrival at the venue nearly caused a commotion when he received a loud ovation from the fans.

After the fierce battle between Nigeria and Guinea, which ended 2-0 in favour of the coach John Obuh-tutored team, it took Siasia nearly 30 minutes to get out of the state box to the car park of the stadium as the fansÂ  held him hostage. While some of them struggled to have handshakes with him, others were begging him to have photograph with them at the same time.

Siasia, who was not at the stadium with bodyguards, was led out of the stadium by some fans who quickly volunteered to guard him, anÂ  effort to get close to the former Nigerian international, who led the U-23 Eagles to win silver medal at the Beijing 2008 Olympic Games.

Some of the fans who spoke to P.M.Sports expressed their love to the Bayelsa State born coach. They also spoke in support of Siasia taking over as coach of the Super Eagles.

â€œYou can see that football fans themselves love Siasia. The reason you see people around him today (Saturday) showed that Siasia isÂ  a man of the people. The best thing I think the Nigeria Football Federation, NFF should do now is to appoint him asÂ  Eaglesâ€™ coach,â€ said one of the fans, Gideon Chukwu.

â€œSiasia will definitely succeed as Eaglesâ€™ coach if given the job. He has done it with the Olympic team. He has the quality and flair to take up the job and can control the big boys in the senior national team,â€ said another fan, Wasiu Salami.