USA Were Hard For Us â€”Egan 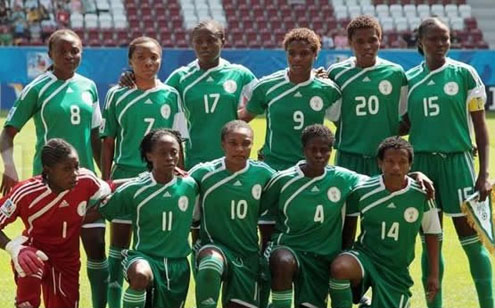 Coach of Nigeriaâ€™s Falconets, Ndem Egan has described yesterdayâ€™s quarter final victory over theÂ  USA at the ongoing FIFA U-20 Female World CupÂ  in Germany as the toughest test for his side.

The Falconets came from a goal down to win the cracker, which earned them a place in the semi-final for the first time.

According to him â€œI would agree that this is the biggest achievement for womenâ€™s football in Nigeria. We knew we had never exceeded the quarter-finals before so our target was to get to the semi-finals and from there to think about the final. All Nigeria will be so happy with this result. We had a few lapses in the first half because the players forgot what we told them but in the end they fulfilled their promise to get to the semi-finalâ€.

Nigeria won a penalty shootout to claim a place in the semi-finals at the end of an enthralling struggle in Augsburg. Ironically it was USAâ€™s golden girl Sydney Leroux who missed with the USâ€™ fifth penalty to seal the African sideâ€™s 4-2 victory, their captain Christine Nairn having seen her attemopt saved as well.

It was a notable triumph for the Falconets who had never before won a quarter-final in a FIFA womens competition and who had faltered at the last-eight stage on three previous occasions in the FIFA U-20 Womenâ€™s World Cup. Ndem Eganâ€™s team had been overrun in the second half but found their feet and plundered a magnificent equaliser through Helen Ukaonu late on. They now face Colombia in Thursdayâ€™s semi-final in Bielefeld in what is a major surprise with USA the two-time champions and the most successful team in the history of the competition.

US started confidently and it was clear newcomer Casey Short was going to enjoy some freedom down the left. In the sixth minute Kristie Mewis invited her to run on to a through ball with her marker left standing. It was a great chance but Alaba Jonathan saved well with her legs.

In the next instant a free-kick high up the field was rolled into the path of Mewis as the Nigeria defence slept. Fortunately for them Amarachi Okoronkwo had read the danger and was back to cover.

It all proved a preamble to the inevitable USA goal. Again it was poor defending that gifted them a generous amount of room. When a short corner was played to Mewis she was able to run several metres with nobody challenging. When she squared the ball across, Amber Brooks was on hand to side-foot her first goal of the tournament.

Nothing had been seen of Nigeriaâ€™s twin hot-shots, Ebere Orji and Desire Oparanozie though they did break out to land their first shot of the game with Cecilia Nku aiming high and wide. Normal service was quickly resumed as Zakiya Bywaters, operating down the right. moving infield before forcing two saves from the goalkeeper.

Nigeria did improve near the end of the first half but their efforts foundered on a rock known as Crystal Dunn who twice came in with well-timed and determined challenges.

The second half proved a reversal of what had gone on before with Nigeria now finding some confidence and taking control of the game. Oparanozie worried Bianca Henninger momentarily from distance but the goalkeeper pulled off a good save high up by the left-hand post.

Orji then had a chance as a long ball bounced high and threateningly inside the penalty area but there were enough defenders to rescue the situation.

The Falconets clearly saw long shots as their route back into the contest.