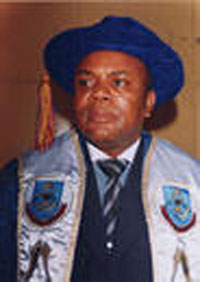 Internet users on Youtube and Facebook are currently having a field day viewing a naked randy lecturer at the Ambrose Alli University, Ekpoma Edo State, Nigeria, who tried to sleep with his student in order to give her a good grade.

The video of the engineering lecturer and a Knight of St. Mulumba, identified as Peter Otubu, was all over the internet immediately it was posted on Youtube. He was stripped by students when he wanted to sleep with the female student.

He was allegedly caught naked in the room of a female student, Judith Okosun, who he tried to sleep with in order to pass her.

There have been different reports about the sex scandal. While a source alleged that the disgraced lecturer had been pestering Okosun, a 400 level student of Electrical Electronic for sexÂ  for many years and even failed her in two papers just because she refused to have sex with him, inÂ  another report it was stated that the girl set him up because he failed to pass her after having sex with her.

The lady allegedly organised with her colleagues to put the lecturer to shame.

She was said to have agreed to have sex with him in her room on condition that he must first pass her in two papers.

Unknown to the randy lecturer that he had been set up, he drove to the girlâ€™s apartment on the appointed day and walked into her room.

He removed his clothes and pants and was about having sex with the lady when she jumped up and started shouting.

Her shouts attracted her colleagues who had laid an ambush for the lecturer rushed into the room and accosted the lecturer.

For about seven hours, the students humiliated the lecturer thoroughly by taking his naked pictures on their phones. They cursed, insulted him and called him unprintable names.

The aggrieved students were also seen playing with his penis and some even made efforts to cut it off but were prevailed upon by other students to spare him.

Before releasing him, the students made him to sign a cheque for N100,000 to placate the lady in question and prevent the circulation of the news on the campus.

On regaining freedom, the randy lecturer reportedly ran to the police station and alleged that he was kidnapped by the students.

Meanwhile, Edo State Governor, Adams OshiomholeÂ  has ordered the authorities of Ambrose Ali University, Ekpoma, to investigate the allegation of sexual harassment against the lecturer.

Spokesman for the university, Chris Adama-Igbo, toldÂ  reporters that following the governorâ€™s order, the registrar of the university had issued queries to both Mr. Otubu and Ms. Okosun.

They have up till today, July 26, to respond to the queries, after which they will face a panel to be constituted soon by the university.

â€œThere is a safeguard against such malpractices. But at times, students fear that they will be stigmatised,â€ he said.

â€œThey also fear reprisals from other lecturers, that others might fail them. So they keep their experiences to themselves.â€

He disclosed that three years ago, a lecturer who was found guilty of sexual harassment inÂ  the department was dismissed from the university.